‘Minority Report’ makes its way to FX to enthrall audiences 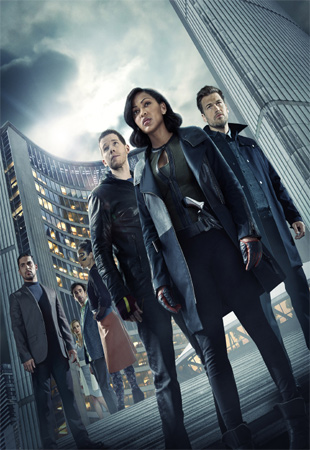 FX, India’s edgy entertainment channel, is known for showcasing an array of critically acclaimed and popular shows. Taking its entertainment quotient a notch higher, the channel is geared up to premiere one of the most action-packed series of all times – Minority Report. Adapted from legendary film-maker Steven Spielberg’s esteemed movie Minority Report starring Tom Cruise, Colin Farrell and Samantha Morton among others, the TV series is a sequel to what happened after Cruise shut down the PreCrime program, an experiment in justice that relied on the visions of three precogs to put bad guys behind bars in anticipation of the crimes they were hypothetically going to commit.

A one off concept redefining the ultimate Sci-Fi experience, the 2002 movie ‘Minority Report’ was extremely well-received by audiences and critics alike.Taking cue from the movie, the television series with the same name was introduced for television viewing audiences.

The TV series ‘Minority Report’ picks up from when the PreCrime unit in the movie shuts down in the year 2054 and fast forwards to 11 years later in 2065 in a world where a lot of people seem to miss PreCrime. The three precogs (individuals who possess precognition as a form of extra-sensory perception and have the ability to predict crime before it takes place)Agatha (Laura Regan), Arthur (Nick Zano) and his twin brother Dash (Stark Sands) integrate into society to live a normal life. However,flashes of murders yet to happen still enter their heads and Dash decides to ignore the abolishment of the PreCrime unit to stop the murders and save lives. He decides to go vigilante with one of Washington DC’s detectives Lara Vega (Meagen Good).

The first ever Steven Spielberg movie to be adapted into a TV series, Minority Report is a thrilling show that is certain to leave viewers at the edge of their seats!

Tune-in to watch Detective Lara Vega and Dash take on crime in a way that has never been seen before on Minority Report premiering in India on March 7, every Monday to Friday at 9PM only on FX and FX HD!

OLX Launches An All India Campaign Against Procrastination
MediaInfoline Feb 26