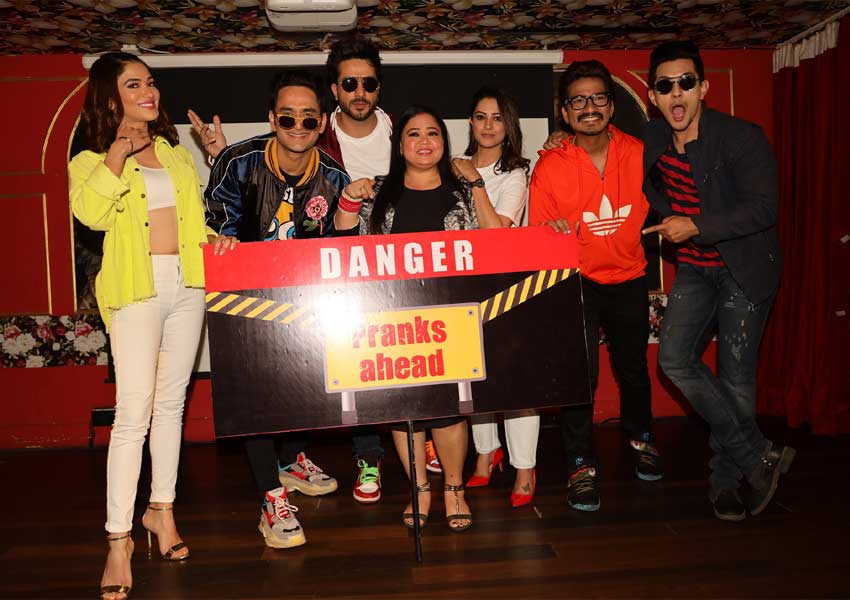 COLORS’ is all set to unravel their rather unknown side with ‘Khatra Khatra Khatra’. Taking fun and frolic to another level will be your fabulous television gang – Bharti Singh, Harsh Limbachiyaa, Vikas Gupta, Ridhima Pandit and Aly Goni who will outwit each other through a series of pranks to emerge as the ultimate prankster! Produced by BBC Studios, ‘Khatra Khatra Khatra’ premiers on 11th March 2019 and will air every Monday to Friday at 6:00 p.m.

After entertaining audiences with their stunts and funny antics while in Argentina, the five popular television faces will feature in a rib-tickling show based on the concept of embarrassing dares and one-upmanship. The contestants engage in a cat and mouse chase of unpredictable incidents. Every episode will see one of the five celebrities assume the role of the anchor and challenger who sets bizarre tasks for the rest. No matter how embarrassing, every contestant must outwit each other and complete an indoor as well as an outdoor task. The contestant adjudged as the ‘loser’ must face a big punishment. What’s exciting is the fact that the losing contestant can even convince their fans in the audience to take the punishment on his behalf.

Speaking about this novel concept, said Nina Elavia Jaipuria – Head, Hindi Mass Entertainment and Kids TV Network, Viacom18, “At COLORS, we always aim to push the boundaries of entertainment by presenting new concept across genres to our viewers.  As a pioneer and leader in the space of comedy, we are delighted to add another unique property, Khatra Khatra Khatra, which will serve our audience with a perfect blend of stunts and comedy, a concept that has not been explored in this space so far. For an early primetime band, a concept like this is just apt given its light-hearted and playful nature. It is a first-of-its-kind practical prank show on a Hindi general entertainment channel and we are sure it will strike a chord with the viewers.”

Manisha Sharma, Chief Content Officer, Hindi Mass Entertainment said, “With so much drama happening around us it’s nice to have a refreshing concept like khatra khatra khatra with India’s favourite comedy troupe – Bharti, Harsh, Aditya, Vikas, Ridhima and many more.  Starting 11th March, this mischievous gang will lighten up your evenings with endless laughter, games and quirky pranks in the early primetime band starting 6 pm. Its surely going to be an entertainment extravaganza.”

Soniya Kulkarni, Creative & Business Head, BBC Studios said, “BBC Studios is happy to collaborate with Colors again on an exciting new variety show. KKK  has a fun cast of celebrity contestants who will constantly test each other’s limits with how far they are willing to go on a dare from a friend. It’s always exciting to get an opportunity to crack a new format and KKK promises to show a fresh, wacky and addictive side of these celebrity participants with its pranks, gags, games and full on masti on a daily basis”

‘Khatra Khatra Khatra’ is a fun competitive show where the audience will witness a series of mortifying practical pranks performed by the contestants. They will challenge each other to do bizarre and eccentric dares, failing to conduct which will make them undergo punishments of strange proportions.