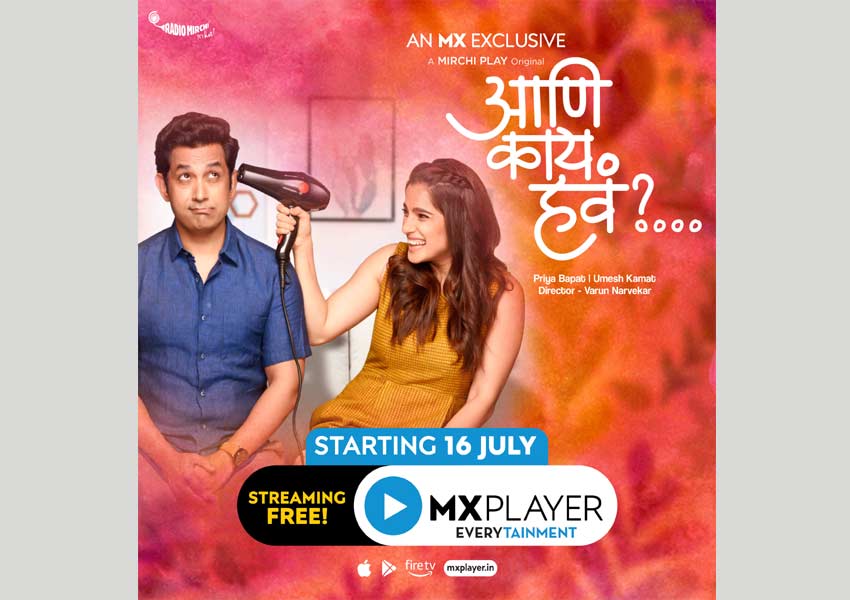 Marriages are full of firsts – the first time you cook together, the first festival you celebrate as a couple, your first major fight, the down payment for your first car and the joy of buying your first house. This monsoon, it’s raining love as dynamic duo – Priya Bapat and Umesh Kamat reunite for Marathi web series – Aani Kay Hava, 7 years after the release of their acclaimed film Time Please along with producer Anish Jog. Relive your magical firsts in this 6 episodic series that is directed by Varun Narvekar of Muramba fame.

With this light hearted romantic saga – MX Player, India’s leading streaming platform builds its regional content library. All episodes of the series will stream for free on the app that is available to download on Android, IoS and Amazon Fire TV.

Speaking about the same, Umesh said, “Priya and I are ecstatic to re-unite on screen after 7 years. We really missed our on-screen presence together and so when we were approached for ‘Aani Kay Hava’, we both immediately agreed to be part of the show. The narrative beautifully captures the small yet precious nuances of a married couple and traces the firsts that every couple experiences.”

“This is a story about you, me and all of us who believe in finding companionship for life and in the overall institution of marriage. Saket and Jui are both trying to adjust to this new role of being married and falling more in love with each other – one day at a time. The story line of ‘Ani Kaay Hava’ is very simple and will surely touch the heart of its viewers, as it did mine” – said Priya Bapat.

Director Varun Narvekar concluded saying, “I wanted to capture the ‘firsts’ that couples go through with an intricacy and care that will truly leave you with a smile on your face. It has been a wonderful experience shooting for this series and I am thrilled to be working with such talented actors who brought the script alive with such nuanced performances.”