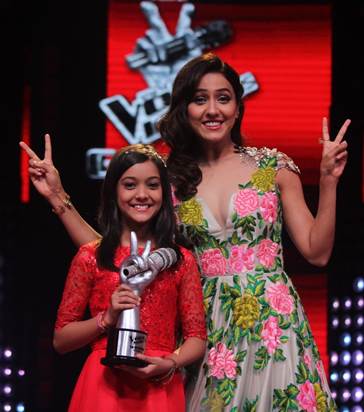 &TV’s The Voice India Kids, a show that enthralled viewers across the country and touched a billions of hearts, came to an end today with a befitting Grand Finale that announced the winner of the first season of the kids singing reality show! Starring Coaches Shaan, Shekhar Ravjiani and Neeti Mohan, the show that revolutionized the singing reality genre with a unique format of BLIND AUDITIONS, BATTLE ROUNDS and LIVES, found its winner in Sultanpur, UP’s Nishtha Sharma from Team Neeti. From the house of Talpa and produced by Endemol Shine India, The Voice India Kids Grand Finale saw the cast of Ae Dil Hai Mushkil – Ranbir Kapoor and Anushka Sharma cheer the contestants amidst much excitement and fanfare.

A journey which started with 94 contestants who came from across India, saw 18 contestants in the final phase – who got eliminated week-on-week through audience voting. From amongst the 6 finalists, 3 contestants from Team Neeti (Kavya Limaye, Vishwaprasad and Nishtha Sharma), 2 contestants from Team Shaan (Pooja Insa and Priyanshi Sharma) and 1 contestant from Team Shekhar (Shreya Basu) contested for the most coveted title – Winner of  Patanjali Herbal Powervita presents, The Voice India Kids, co-powered by Surf Excel, Good Knight and Lenskart.com.

The winner Nishtha Sharma received a cheque worth Rs. 25,00,000/- from &TV along with a recording contract from Universal Music. The runners up Pooja Insa and Kavya Limaye received cheques worth Rs. 10,00,000/- each. All the three participants were awarded gift hampers from Good Knight.

An overjoyed Nishtha said, “I feel on the top of the world! I would sincerely like to thank my coach Neeti mam for mentoring me and guiding me towards victory. Also, my parents who stood by me and encouraged my passion for singing. The Voice India Kids is a great platform for singers like me to realize our potential and get an opportunity to be mentored by stalwarts from the industry.”

Nishtha Sharma, who hails from Sultanpur belongs to a musically inclined family. Her father & mother both are music teachers and run a music institute while her elder brother is pursuing B.A in music. Daddy’s girl, Nishtha, is vivacious and is deeply inspired by the legendary singer Lata Mangeshkar and Shreya Ghoshal. Having cleared 3 levels in classical music, the talented girl has mastered the art of playing the Harmonium and Tabla.

Coach Neeti Mohan added, “I am so proud that Nishtha won the first edition of The Voice India Kids. I always used to call her Sargam Queen. I am deeply humbled by the love and support of the audience who have bestowed this title upon my Nishtha.  All the kids who participated in the show have been exceptional with a willingness to learn. That’s all that one needs in a student. I am proud of Nishtha and I would hope that this musical journey helps her reach greater heights in the future.”`

The star-studded evening saw Coaches Shaan, Shekhar and Neeti in high spirits performing on stage and setting an energetic celebratory tempo to the Grand Finale. The evening also witnessed The Voice India Season 2 being announced with a campaign that highlights Awaaz Se Bada Na Koi.

The Zoom Studios announces its original ‘Happily Ever After’