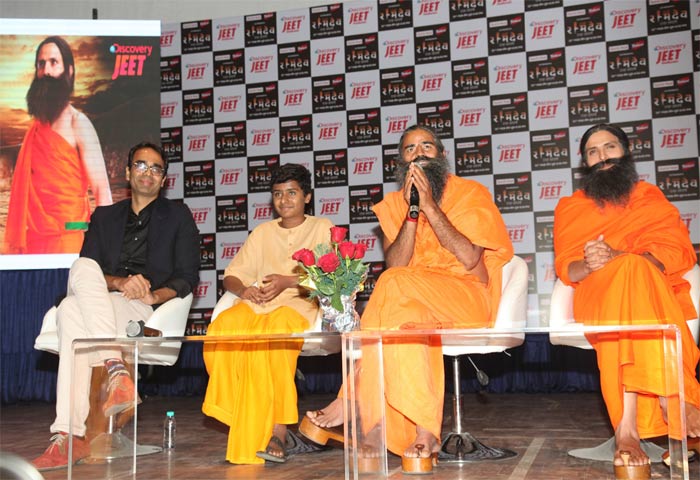 Discovery JEET, the eagerly awaited new entertainment channel from Discovery India with meaningful content spanning biopics, historicals, crime and comedy, is all set to showcase Swami Ramdev’s never seen before inspirational life journey starting February 12, 2018 every weekday at 8:30 pm. Swami Ramdev is popular across the length and breadth of the country and beyond but little is known about his background. Where did he come from? What are his origins? What was his journey? In this official biopic, shot on locations in Rajasthan, Haridwar and Mumbai, Discovery JEET will narrate the Swami Baba Ramdev’s life story, from his start as a poor farmer’s son to becoming a national icon. Co-Produced by Ajay Devgn FFlims and Watergate Production, Swami Ramdev’s life is symbolic of ‘Hai Mumkin’ attitude which forms the bedrock of Discovery JEET’s programming philosophy.

“Swami Ramdev’s life arc – with its many ups and downs – is an inspirational story of an individual winning against all odds, the exact thesis of Discovery JEET, launching Feb 12th,” said, Karan Bajaj, Sr. Vice President & General Manager – South Asia, Discovery Communications India. “Our writers’ team first met Swami Ramdev for a 1-hour show, and then we realized that his life cannot be captured in such a short series. The result is an epic bio pic spanning 85 episodes which we believe will capture the hearts and minds of our target audience across the country.”

“I am humbled that Discovery JEET has made a television series on my life. I was initially not keen to open-up my life for a television series but Discovery JEET’s philosophy of ‘Hai Mumkin’ attracted my attention,” said, Swami Ramdev. “My life has not been an easy ride, I have faced ‘sangarsh’ all along and the bio pic traces the sequence of events as they emerged.  I want to give a message to all countrymen – never give up, life will offer its challenges but if you are up to it, day in and day out, then nothing can stop you from succeeding.”

Acharya Balkrishna, said, “We receive millions of requests from curious followers wanting to know more about Swami Ramdev’s life. I am delighted that their wish has been granted and a larger-than-life life bio pic is being showcased on Discovery JEET. I hope and pray that people across the country imbibe and get inspired from the life of a living legend.”

Swami Ramdev: Ek Sangharsh’s trailer and TV campaign have generated immense interest on the social and have raked up an impressive 25 million plus views across YouTube and Facebook.

Discovery Communications India (DCIN)has signed Netflix as the exclusive global OTT platform partner for the content of Discovery JEET. The deal will ensure that Discovery JEET’s marquee content, with English subtitles, will be available to audiences in more than 190 countries world-wide. Netflix communities globally will be able to binge-watch each series after it is aired on the Discovery JEET channel in India.