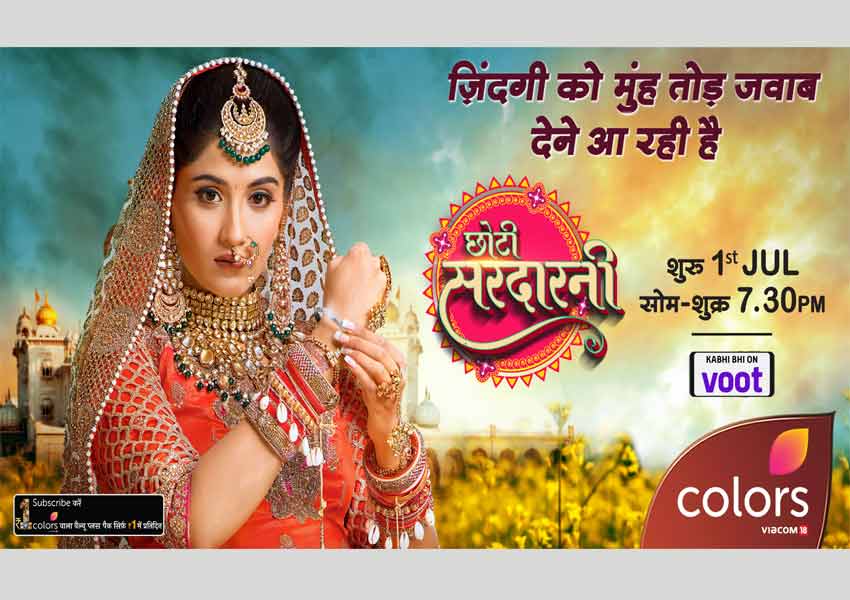 COLORS’ upcoming fiction offering Choti Sarrdaarni sketches the life of one such woman, Meher, who overcomes hardships and fights fearlessly to become an invincible mother. The show stands true to the fact that there is no greater warrior than a mother protecting her child and highlights the multiple facets of Meher as a ‘Bahadarni’, who will be known as the Choti Sarrdaarni. Produced by Cockcrow and Shaika Entertainment, Choti Sarrdaarni will go on air starting 1st July, every Monday-Friday at 7:30 pm.

Based in the heartlands of Punjab’s SardoolGarh, the show traces the life of Meher Dhillon (played by Nimrit Kaur), a level headed Punjabi girl who dreams of a perfect life with, Manav (played by Hitesh Bharadwaj), the one she loves. But all her dreams and hopes come crashing down due to unforeseen circumstances created by Meher’s mother Kulwant (played by Anita Raj) and she is left to fight her own battles. She then meets Sarabjit Gill, (played by AvineshRekhi) a politician and a single father and her life takes an unexpected turn. Fierce and full of fire, Meher emerges stronger, learns to combat her fears and becomes the protector of her family, a ChotiSarrdaarni.

Speaking about the launch, Nina Jaipuria, Head, Hindi Mass Entertainment and Kids TV network Viacom18, said – “COLORS is committed to championing and propagating stories of tenacious women through shows like Shakti…AstitvaKeEhsaas Ki, Udaan and now with Choti Sarrdaarni. Through this show, we want to celebrate the spirit of every woman who has been through tough times but has come out stronger. It is an ode to all those women who have empowered themselves and played a prominent role in protecting and shaping the future of their families.”

Resonating similar sentiments, Manisha Sharma, Chief Content Officer, Hindi Mass Entertainment said, “Choti Sarrdaarni is a story presented through the lens of a girl, who persists against all complexities of life, breaks stereotypes and paves the path to become a strong woman and moreover a stronger mother.Courage is a woman’s strongest armor and if we draw inspiration from our inner self, we can achieve anything and Meher’s story will remind everyone of just that. The viewers will relate to Meher’s struggles and her valor as she finds happiness, embraces motherhood and becomes a Bahadarni.”

Rajesh Ram Singh, Producer, Cockcrow said, “The show captures the transformation of Meher from being a young girl to a brave Bahadarni. It is a story of a real woman and how she achieves her true worth by eliminating all odds. The show is set against the colorful backdrop of Punjab and we will have various elements that will take the viewers into the by lanes of its gifted cities. We have been shooting extensively in and around Amritsar to bring out the true flavor and culture of the city.”

Actor Nimrit Kaur essaying Meher’s character said, “I feel honored to be giving my acting career such a wonderful start by portraying a character as impactful as Meher’s. She strives to build back her life after falling apart several times and does so gracefully while achieving remarkable feats.  She transitions from a simple girl into a Bahadarni – a shield of her children and family. The narrative of the Choti Sarrdaarni is very heart-warming and Meher’s character seemed to be a perfect fit as I am a Punjabi and it was a sweet coincidence to be playing a Sardaarni in the show. I am very excited about this new chapter of my life and looking forward to it.”

Avinesh Rekhi playing Sabarjit Gill commented, “I will be essaying the role of a politician, Sarabjit, who is a single parent and a loving husband. He meets Meher at a crossroad but accepts her with open arms and gives a new meaning to her life. I take immense pride in the fact that I will be the first lead actor to sport turban on television with this show and I hope that I am able to carry it off with absolute grace and respect.  The concept of Choti Sarrdaarni is very promising and comes with a powerful message and I am certain that the audience will love me in this new avatar.”

Anita Raj portraying Kulwant Kaur said, “My character in the show, Kulwant, is Meher’s mother who is an authoritative Sarpnach and an ambitious woman.  She wants Meher to get married to Sarabjit in a bet to find inroads into the political system and fulfill her longstanding dream of becoming a politician. It’s a very strong and interesting character and I am enjoying playing the part of Sarpanch Kulwant Kaur in the show. The concept of Choti Sarrdaarni is very fresh and highlights different shades of a woman that will resonate with the audience.

Hitesh Bhardwaj playing Manav Sharma said, “I am essaying the role of Manav Sharma who is deeply in love with Meher. He comes across as a tough person but also has an emotional side too especially when it comes to matters of the heart. Meher is the centre of his universe and his love for her is unconditional. I am elated to be a part of the show that is backed by a strong concept and exceptional storyline.”

The channel has planned a series of marketing activities at the grassroots level to strike a connect with the viewers. ChotiSarrdaarni branded Chabeel vans will trial around the busy streets, interiors, markets and high footfall areas of Punjab and NCR distributing packaged rose flavoredlassi known as Verka. LED screens will be put up on the vans displaying the show’s promos to generate more buzz. The vans will be led by a bike rally of Sardaarnis dressed in traditional attires wearing Paranda and Kada accompanied by Dhol beats bringing alive the theme of the show.As a part of the digital initiative, the channel along with Jam8 will also launch an upbeat music anthem celebrating the spirit and swag of true Sarrdaarnis featuring the lead of the show, Nimrit Kaur along with Punjabi artist Sara Gurpal. The viewers can tune into the show between 1st to 5th July at 7.30 pm and also participate in a contestant to win an all-expense paid trip to Singapore.