The Timeliners tells story of Three Girls in an Engineering World 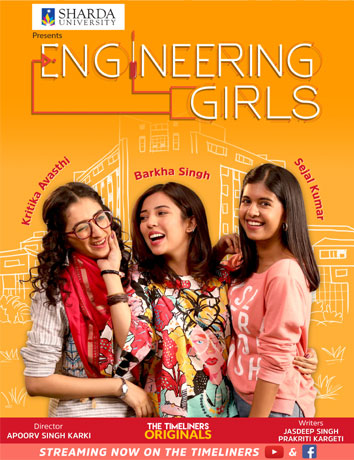 The Timeliners is now presenting a brand new web-series ‘Engineering Girls’. The 5 episode web-series tells the story of three feisty girls, Teja, Maggu, and Sabu, as they navigate the halls & hostels of their engineering college. The Timelinershas partnered with Sharda University for the show.

The 1st episode has just been released on The Timeliners & TVFPlay. It can be viewed:here

Written by Jasdeep ‘Sardarboy’ Singh and PrakritiKargeti, ‘Engineering Girls’is a fresh take on the engineering hostel experience. Featuring three of the most popular young online talents,Barkha Singh, Sejal Kumar and KritikaAvasthi, the show follows the misadventures of three women who want to leave a mark on the world, despite the odds. Through five episodes, the trio chases their dreams of finding love & starting their own company, while being a part of the drama club and trying to submit their practical files on time. ‘Engineering Girls’ is directed by Apoorv Singh Karki, who also helmed web-series like The AamAadmi Family and 2018’s runaway hit FLAMES #PadhaiAurPyaar on The Timeliners.

“We’ve seen college stories told from a guy’s perspective. With this show, we wanted to explore the craziness that ensues in a girl’s life in an engineering college. Going behind the hostel doors and into the lives of engineering girls is a story that have been wanting to bring alive for a while, and I’m delighted with the story, cast and crew. Thanks to Barkha, Sejal, and Kritika for really bringing the characters alive. The audiences are going to love their performance.”, says Apoorv Singh Karki, Director of Engineering Girls.

Vijay Koshy, Head – Brand Partnerships, The Viral Fever said, “Sharda University is the perfect partner for ‘Engineering Girls’. With this show, we wish to give the audience a female perspective into the lives of girls in an educational institution pursuing courses that are considered be male dominant. We are excited to see how the audience will respond to the show.”

Talking about the show, Prashant Gupta, Executive Director, Sharda Group says, “’Engineering girls’ a web series by The Timeliners is a reflection of the amazing campus life experienced by over 45000 Sharda University alumni. This series showcases Sharda’s focus on empowering women through world-class education and how students from all over India and 74+ countries are discovering the campus life at Sharda University. We really wanted to recreate the magic of the most loved college movies with ‘Engineering Girls’ and The Timeliners is the prefect platform for our target audience.”
The show was announced with a teaser on YouTube which garnered over 1 million views in just 2 days, and trended at #2. Check out the teaserhere: here

The Timeliners has been making waves in digital entertainment this year with comedy videos and web-series. Recently named ‘Content Startup of the Year’ at Talentrack Awards, The Timeliners is focussed on programming for the youth, choosing to tell stories that have not been seen on-screen yet.