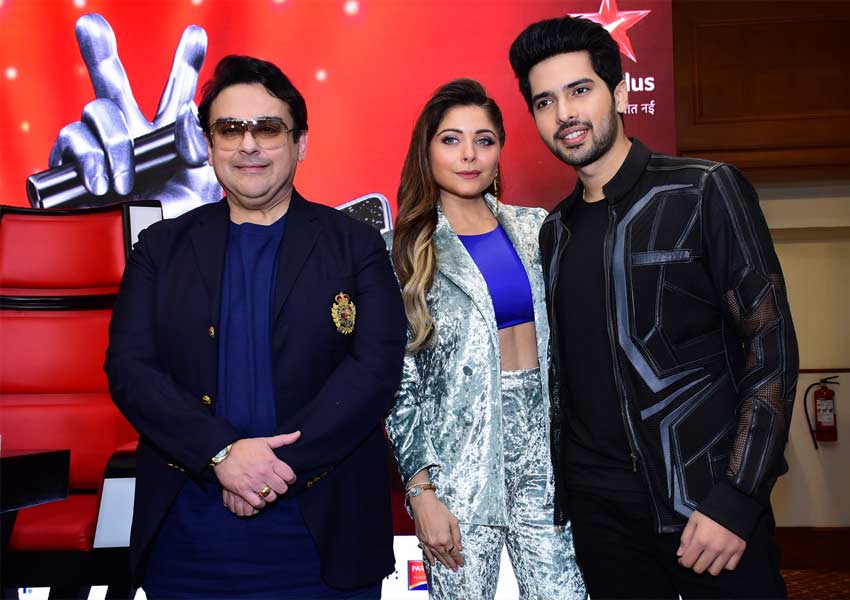 One incredible Superguru along with four phenomenal coaches are coming together on the electrifying show The VOICE on Star Plus starting from February 03rd 2019, every weekend at 8 pm.

The Voice in a hunt to accredit the country’s ultimate voice. The 4-time Emmy Award-winning show has taken the world by storm with international critical acclaim and blockbuster success in 180 territories around the world is now coming to India with an interesting promise ‘Taqdeer Bhi Palategi’. Staying true to its concept, the show will provide a platform to the country’s singing talent, solely based on their voice, transcending all barriers of physical appearance, background, religion, gender.

Adding to the excitement, for the first time ever in the history of the show across nations, the format has been altered to introduce the concept of a super guru and none other than India’s beloved music maestro A.R. Rahman will be seen stepping into that role. The iconic red chairs will be graced by the country’s most celebrated and eminent musicians Adnan Sami, Harshdeep Kaur, Kanika Kapoor and Armaan Malik as coaches, who will provide contestants with unparalleled coaching experience. The show is a journey of finding raw talent, polishing and nurturing them through the coaches’ mentorship and enabling them to unleash their potential to become the best ‘Voice’ that they can. The platform gives the participants, a chance to work with their dream coaches and that is a unique and massive opportunity for any aspiring singer.

The music icon, AR Rahman, who will be seen as a super guru revealed, “I have a very special role as a super guru on the show. The entire idea of not looking at the person and just listening to the voice is fascinating because that resonates with my personal ethos. The idea of finding the next singing sensation based on the soul of their voice and how it touches your heart really appealed to me. I am looking forward to sharing some of my knowledge of music that I have amassed over the years to the coaches and to nurture the participants through the journey of this show”.

Expressing his joy, music veteran Adnan Sami commented, “The coaching experience of the show is unparalleled. The talent in the country is remarkable and the need of the hour is to nurture it. As a coach, I would give the knowledge and insights to the contestant to play on their strengths and grow by leaps and bounds. It is gratifying to be a part of the contestants’ journey where they grow and discover themselves. It is a pleasure to be a coach and guide the contestants in the right direction and be instrumental in their success.”

Further, India’s most loved soulful singer Harshdeep Kaur added, “The pool of ethnic singing talent in India is phenomenal. I always look for ways to promote and encourage the folkloric music & the talent associated with it. The show gives them a platform to get recognised for their voice and touch people’s heart with it. The contestants can showcase their local flavour, identity and personality through their distinct and raw voice.”

Commenting on the show, Kanika Kapoor revealed, “The Voice is once in a lifetime opportunity to make it big in the music industry. The show enables the contestants to makes their voices heard and reach their maximum potential. The sky is the limit if their voice strikes a chord with the coaches and audience alike. I am delighted to play a part as a coach in grooming them to turn their dreams to reality.”

Adding on, the young musical sensation Armaan Malik said, “I am super thrilled to be a coach on the #TheVoice and share the stage with amazing musicians like like AR Rahman sir, Adnan Sami ji, Harshdeep Kaur and Kanika Kapoor.  At the age of 10, I was part of a singing reality show and now 13 years hence, I am on the other side of the table, coaching upcoming musical talents in the country. It’s a pretty surreal feeling for me. I am honoured to be part of a show where such a varied powerhouse of talents are coming together to share their perspectives on music. Each one of us, have something distinct to offer to the contestants and it will be interesting for India to see a show as unique as this, come alive on national television. Just can’t wait to embark on this new journey of mine with #TheVoice!”

Gaurav Banerjee, President, Hindi GECs – Star India, commented, “Star Plus has always been at the forefront of bringing the best of the world content in Indian television. We love The Voice, we hope to make it immensely loved across the country and unearth awesome talent that can enthrall.”

Deepak Dhar, Co-Founder and CEO at Banijay Asia revealed “Keeping in line with Banijay’s constant endeavour to create pioneering concepts, we are proud to announce The VOICE on Star Plus. The Voice is an internationally path-breaking show and with the music legend AR Rahman coming on board as the Super Guru, we are ready to take this a notch higher. We are delighted and thankful to be associated with Star and Talpa for this well-reputed property. With this collaboration, we are thrilled as well as confident to deliver the best and keep up with the expectations of the viewers.”

Tags:
Previous Article
&pictures invokes the feeling of Indian-ness by ‘Saluting the Heroes of India’ this Republic Day
Next Article
Celebrate Republic day with ‘Aisa Desh Hai Apna’ on MY FM