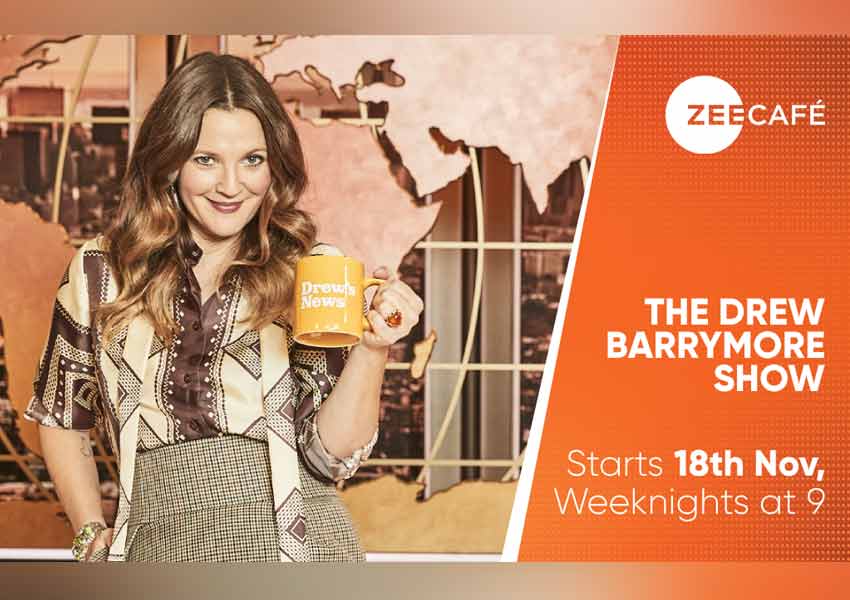 The endearing Charlie’s Angels sensation Drew Barrymore is hitting the television with her debut daytime show ‘The Drew Barrymore Show’ on Zee Café. The businessperson, mom and the most admired actor and cultural icon, Drew Barrymore, is calling for an army of optimism. So, come one, come all! She is looking for recruits. Celebrate the festive season with your family and friends in an exhilarating dose of cheer and inspiration from her. Drew will come up with fun conversations, exciting challenges, loads of love and laughter in the show which is Premiering Wednesday, November 18, weeknights at 9. Drew Barrymore will be the host and executive producer of the show.

Nearly 20 years later, after the blockbuster film ‘Charlie’s Angels’ premiered, the actresses Cameron Diaz and Lucy Liu will be reuniting with the actress and host Drew Barrymore, as a guest on the show. Next on the show, will be featuring Academy Award-winning actress Reese Witherspoon and actor Billy Eichner, who will play a new round named “Would Drew Barrymore Like That?”. In the later episode, Drew will surprise a struggling small business owner with actress Gabrielle Union. Academy Award-winning actress Charlize Theron and new ‘Dancing with the Stars’ host Tyra Banks will also join Drew to teach her the art of ‘smizing.’

Zee Café bringing this show for its audiences in the festive season makes this the brightest destination for information, inspiration, and entertainment. Drew Barrymore is famous for her infectious brand of humour and positivity and here in this fresh and unique, multi-topic format show, she will be seen sharing her undeniably relatable point of view. Various segments that reflect her personal passions have been included in this format by Drew to elevate, inspire and entertain. Segments are compelling lifestyle segments, celebrity guest interviews, heartwarming human-interest stories, upbeat news and collective experiences for viewers designed to enhance all our lives.

The one-stop destination for news, pop culture, human interest and comedy is arriving with Drew along with the heart and humour in life.

So, it’s time to ‘Drew’ it yourself as Zee Café premieres ‘The Drew Barrymore Show’ starting Wednesday, November 18, weeknights at 9.

To know more, follow us on @ZeeCafe, Zee Café, zeecafeindia