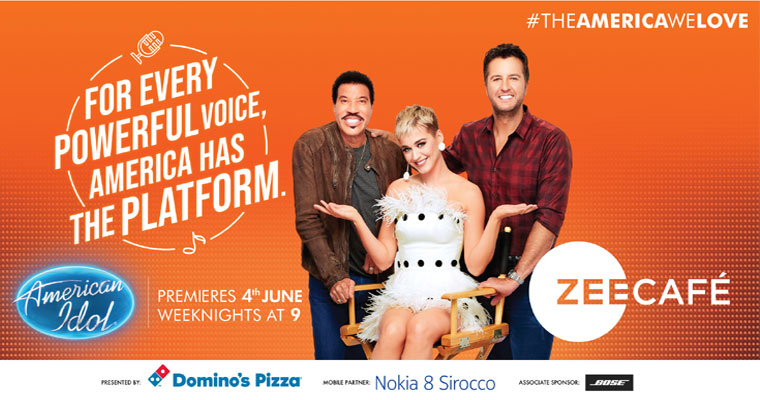 Zee Café, one of the leading general English entertainment channelsin India, is all set to premiere the show that revolutionized reality television all over the world – American Idol.Considered as one of the most iconic shows of all time, American Idol was the first to bring the format of singing reality shows on television. Back with a promise of setting new benchmarks, the show makes its Indian television premiere on 4th June, airing weeknights at 9 only on Zee Café.

Since American Idol’s inception in 2002, it has been a massive platform for aspiring singers to showcase their talent, helping them croon their way into the hearts of millions. Yet again, the show is all set to ensure the launch of all new megastars with an all new panel of celebrated judges. The multi-talented and multi-award winner Katy Perry, Academy and Grammy Award winning legend, Lionel Richie and country music sensation,Luke Bryan. The show will be hosted by Ryan Seacrest who will continue to woo the audience with his charisma and charm.

American Idol is part of Zee Café’s new reality content band [email protected] which brings nine of the biggest reality shows throughout the year at 9 pm for the first time on Indian television.Speaking, about the show, Aparna Bhosle, Business Cluster Head – Premium Channels, ZEEL shared, “American Idol has enjoyed immense popularity through the years, giving the world of music some of its biggest superstars. It has been a platform that makes dreams come true. The show continues to be a favourite of audiences worldwide and we are thrilled to bring the new season to our Indian viewers.”

America has always been considered as a land of opportunities. It has been a beacon of hope to millions around the world, helping them realize their dreams.American Idol is a symbol of the values and integrity that America is admired for and keeping this thought in line, Zee Café conceptualized the campaign #TheAmericaWeLove. The campaign is promoted through robust 360 degree marketing promotions across mediums.
So, don’t forget to watch, American Idol premiering4th June, weeknights at 9, only on Zee Café