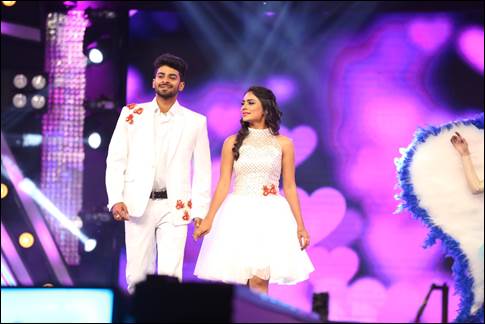 With a firm commitment to present fresh and novel content to Kannada viewers around the world, leading Kannada General Entertainment Channel, Zee Kannada, has announced the telecast of a special on-ground event – Naagini Jatre, that entertained over 8,000 people on 18th February at the Nehru Stadium in Hubli. With stunning performances of the leading stars from Naagini, this Jatre marks the completion of 500 episodes of Naagini. The event will be telecasted on Sunday, 11th February at 4:30 PM, only on Zee Kannada.

Naagini, a top-rated show in the Kannada Television Industry over the last two years, hosted its first on-ground event in Hubli in honor of completing a milestone of 500 episodes. Zee Kannada celebrated this occasion with the North of Karnataka by hosting an exclusive event in Hubli where the audience witnessed marvelous performances with from Amrutha (Deepika Das) and Arjun (Deekshith Shetty), the lead actors of Naagini, who are also the title winners of the recently concluded Dance Karnataka Dance – Family War. The performances exhilarated the audience, where 75 girls joined Arjun (Deekshith Shetty) on stage for his solo performance. Arva, famously known as Gowda from Shrimaan Shrimati, and Nayana from Comedy Kiladigalu Season 1 hosted the action-packed day, where the cast of the show presented a power-packed performance to their fans and well-wishers along with special performances by contestants from Sa Re Ga Ma Pa Season 13 contestants, Drama Juniors and Comedy Khiladigalu. The event entailed various fun tasks, interesting gimmicks and games that gave the audiences a unique opportunity to interact with their favorite stars.

Commenting on the launch, Raghavendra Hunsur, Business Head – Zee Kannada said, “At Zee Kannada we believe in complete inclusivity and find it rewarding to celebrate our landmark moments with our viewers and Naagini Jatre is one such unique occasion that gave us a chance to connect with them. We would like to congratulate the Naagini team on this important milestone and wish them the best for an exciting journey ahead.”

Stay tuned to witness this transformation every weeknight, at 9 PM, only on Zee Kannada.

Don’t miss the special performance by your favorite on-screen couple, on 11th March, between 4:30 PM and 7:30 PM, only on Zee Kannada.