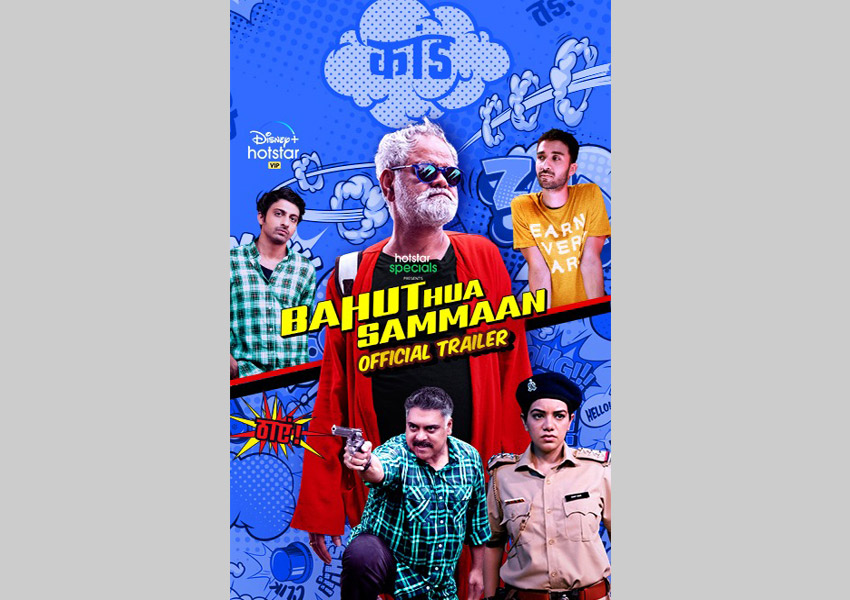 When two engineering students and part-time con men decide to rob a bank in the quaint town of Varanasi – a series of unfortunate events unfold! Hotstar Specials is set to take you on a laugh riot with movie Bahut Hua Sammaan – a satire that sheds light on the struggles of today’s youth and scams that have affected the society; but with a pinch of salt and a truckload of humour. Starring Sanjay Mishra, Raghav Juyal, Abhishek Chauhan, Ram Kapoor, Nidhi Singh and Namit Das, the movie features dabanng characters and quirky one-liners that bring alive the charm of heartland India. Produced by Yoodlee Films – the film production studio from Saregama, Bahut Hua Sammaan has been directed by Ashish Shukla and is set to launch on Disney+ Hotstar VIP on 2nd October 2020.

Bahut Hua Sammaan is the story of Bony and Fundoo who agree to rob a bank since they are unable to find a job after failing their final year of engineering. Guided by an odd old man fondly known as Bakch*d Baba, their masterplan goes totally awry as they realize that the bank has already been robbed and they have been arrested for it. In an attempt to clear their name, they soon fight off assassins, seasoned robbers, elite politicians and religious gurus; all the while unravelling a larger scam. Riddled with humour, the narrative challenges a myriad societal issue faced by today’s youth.

Actor Sanjay Mishra said, “A satire at its core, Bahut Hua Sammaan is a humorous take on the perils of unemployment and also touches upon issues faced by the youth today. The most intriguing part of this movie is the character of Bakch*d Baba; it is one of the most exceptional characters that I’ve played – the way he talks, and his mannerisms are all too real. People are guaranteed a good laugh!”

Dancer and actor Raghav Juyal added, “It’s a funny movie that revolves around two students and con-men who are trying to make easy money but end up finding themselves in a situation that unravels political scams. Even though the movie is addressing a serious issue, there is not a single dull moment. Every character is out-of-this-world yet fits into this story wonderfully well.”

Actor Ram Kapoor said, “Doing movies is always fun, especially one that holds a mirror to today’s societal issues but in a way that makes you want to laugh out loud. In Bahut Hua Sammaan, people will see me in a new avatar of an assassin; it’s not everyday that you get a chance to play a role that is so different from something you’ve done before: