Catch 9XM On Stage with Salim Sulaiman on 9th February 2019 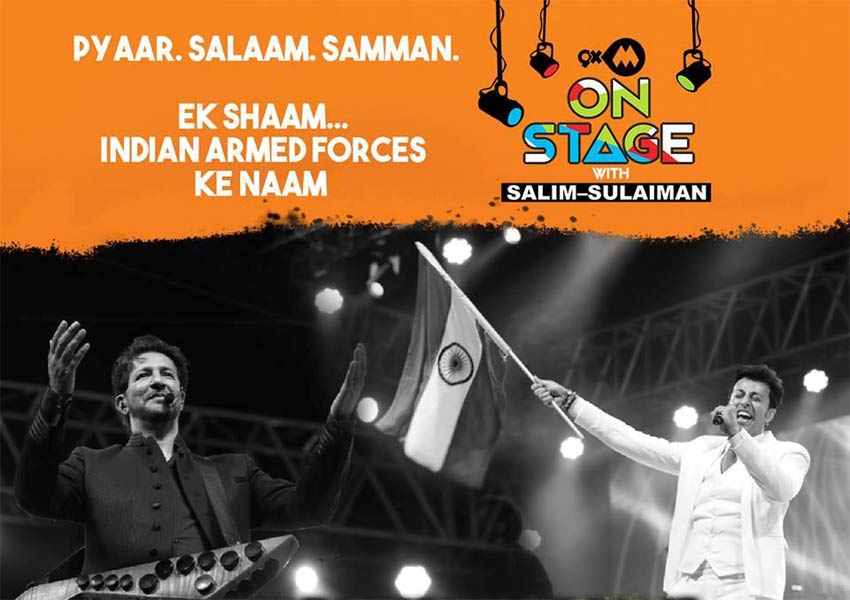 9XM is all set to enthrall the viewers with a brand new property 9XM On Stage. 9XM On Stage celebrates the best of Bollywood music through large scale live events. 9XM On Stage partnered with Salim Sulaiman for a tribute to the Indian Armed forces. 9XM On Stage will be telecast as 1 hour concert to be aired on 9XM at 7pm on Saturday 9th February and on 9X Jalwa at 11am on Sunday 10th February 2019

The special episode will feature the popular tracks played by Salim Sulaiman at the concert along with performances by singers Jonita Gandhi, Raj Pandit, Vipul Mehta and the very famous Manganiyars from Rajasthan. The performers had the audience dancing on some of the best Bollywood music. The on-ground event was attended by around 3500 people all from the Indian Armed forces and their families.

Speaking about the concert, Salim-Sulaiman said “We are grateful to 9XM for bringing together such a musical night for the Indian Armed forces and their family members. Our Nation’s borders are safe because of our soldiers who undergo many hardships to provide us a safe and secure environment across our Country. It was an honour to dedicate an evening of music and entertainment as a tribute and thanksgiving to the armed forces and make it a night for everyone to Remember.”

Speaking of the special episode created for the viewers Mr. Amar Tidke, Chief Programming Officer 9X Media Pvt. Ltd. said “9XM On Stage celebrates the best of Bollywood music through large scale live events. The first concert in association with Salim Sulaiman was dedicated to the Indian Armed Forces who have been sacrificing their lives for our Nation.  It was an outstanding experience to watch the families of these soldiers enjoying and dancing to foot tapping Bollywood music. We are truly honoured to have been given this opportunity to entertain them with our music.”

9XM On Stage with Salim Sulaiman