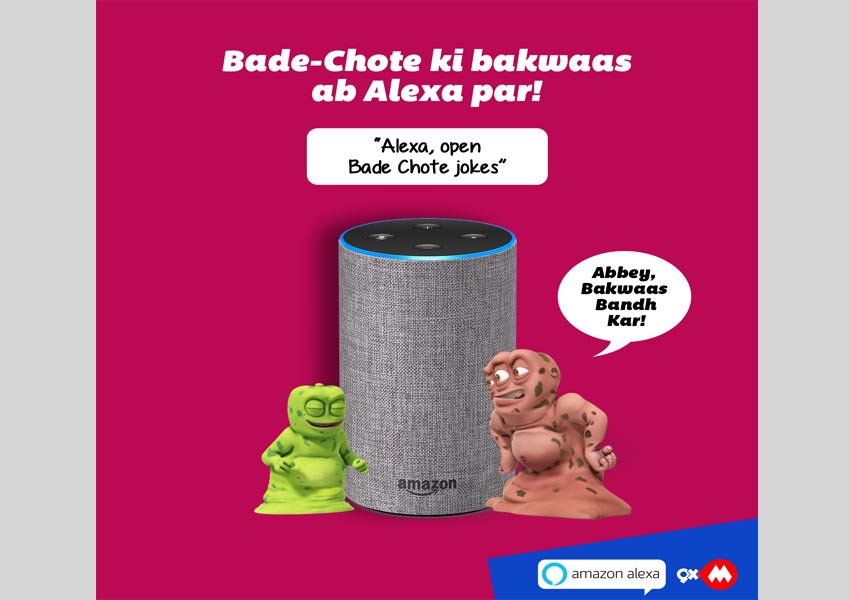 Bade-Chote have a new hangout! In addition to entertaining viewers on television, 9XM’s popular duo will also be able to give you a good laugh with their jokes on all Alexa-enabled devices.

Launched today, the Bade-Chote skill for Alexa will allow users to interact with the characters through voice commands. The skill can be accessed on Amazon Echo smart speakers, Alexa built-in devices such as Harman Kardon Allure smart speakers or iBall Decibel headsets, as well as the Alexa app for iOS and Android devices.

Commenting on the launch of 9XM’s Bade-Chote skill for Alexa, Dilip R.S., Country Manager for Alexa Skills, Amazon India, said “We are constantly on the lookout for skills that not only provide information but also entertain our subscribers. With Bade-Chote jokes, we are sure to turn up the entertainment quotient for our users – from youngsters and kids, to the entire family.”

Speaking on the occasion, Kapil Sharma, SVP Marketing and PR, 9X Media Pvt Ltd said, “9XM is a preferred destination amongst the youth and we engage with our viewers across platforms which are popular youth hangouts. Over the years Bade-Chote have connected with audiences on platforms including malls, cafes, multiplexes, IVR calls, mobile games, Facebook messenger chatbots, etc. Our decision to build an Alexa skill is an extension to reach out to our audiences where they hangout. We are confident that the skill will resonate with Alexa users and Bade-Chote fans across the globe and keep them hooked for more!”

The Bade Chote skill on Alexa will be promoted across television and digital communities of 9XM.

So if you have a quirky sense of humour and like comedy ask your Amazon Echo devices to tell you a Bade-Chote joke now!