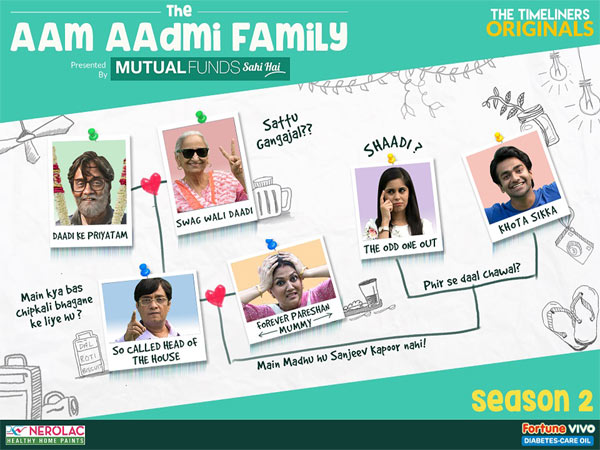 India’s first web series specially created for the entire family titled ‘The Aam Aadmi Family’ by Timeliners wraps up its second season with a whopping viewership across social media. With more than 9 Million views on YouTube and 16 million views on Facebook content, the series has managed to successfully surpass the numbers garnered from its first season. Following the massive love received from its viewers, the success of ‘The Aam Aadmi Family’ makes Timeliners a trendsetter in creating wholesome family entertainment on the web.

With amiable characters portraying classic middle class family values, The Aam Aadmi Family is a story of every Indian middle class household. The second season saw Sharma family dealing with day to day problems together as Mr. Sharma gets a transfer to Shimla and Sonu, the daughter of the house is about to get married. On a voyage of sorting life, the Sharma family supports each other in good times and bad, reaffirming faith in love and family bonds. Season 1 of The Aam Aadmi Family was released on YouTube last year, and garnered nearly 10 million views as well. The second season is available to watch on TVFPlay, and The Timeliners’ YouTube & Facebook channels.

Thrilled about the success of The Aam Aadmi Family Season 2, Director Apoorv Singh Karki said, “Being brought up in a middle class family, the emotions of family bonding and bantering are a legacy we all grow up with. The biggest inspiration has been my mother who is a housewife and knows her family thoroughly- the good and bad of it. It won’t be an exaggeration if I say she’s savagely sarcastic and gives some serious burns in arguments. Sometimes I feel she’s born with a screenplay! The nostalgia is an add on. We all got emotional shooting some scenes and other times we were rolling on the floor with laughter- thanks to the brilliant actors Brijendra Kala, Lubna Salim, Kamlesh Gill ji and Sudheer kumaar.”

He further added, “Working with seasoned actors is always a great experience. The show has been written with great observations thanks to Kunal Aneja, Abhishek Srivastava and Shefali Parashar. The execution team has been my biggest strength. The Assistant Directors , Art Director, DOP, Stylist, Production team from both seasons have done a phenomenal job and they deserve as much appreciation. We honestly didn’t expect this tsunami of love for both the seasons. We are already being bombarded with questions about a Season 3! We are still recovering from the hangover of this one but we promise to bring another season to your screens very soon.”

Speaking about the same, Akansh Gaur, Executive Producer, The Aam Aadmi Family shared, “I’ve always believed that stories can’t be limited by the medium and now after two successful seasons of The Aam Aadmi Family, my belief has further strengthened. Web has been a boon for new age storytellers like us who want to challenge the embellished conventions of content. The Aam Aadmi Family is only a baby step in that direction. We plan to bring a lot more stories which strike a chord with the new age audience and manages to move them.