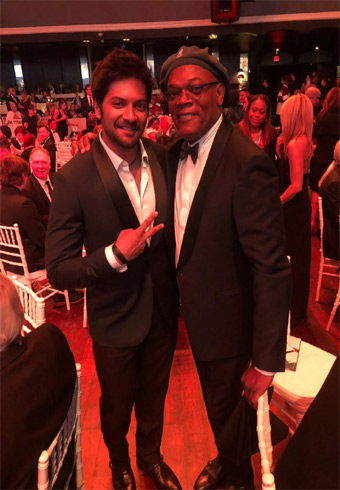 Ali Fazal is currently in LA working on the prep for his next Hollywood unannounced venture and alongside he is also been attending an array of work meetings. The actor will soon head back to India where he begins shoot for Tigmanshu Dhulia’s Milan Talkies. The actor made a huge splash internationally last year when his Hollywood film, Victoria and Abdul released earning him a coveted spot to be the first Indian with a titular lead role in a Hollywood film. His role an Abdul Karim was widely appreciated.

Now the actor has since then been in news on several occasions for his various developments in the west. While in LA, the actor recently rubies shoulders with some of the best names in Hollywood. Attending the annual Hollywood Beauty Awards, an annual forum where the best in talent of the hair, beauty and design talent is awarded, Ali was also elected as an award presenter.

At the ceremony Ali was elated to have met, his icons like Britney Spears and Samuel L Jackson. In face he even earned praises from the man himself, Samuel L Jackson who was all praises for Ali’s role in Victoria and Abdul.

Speaking about his experience, Ali said, “it was surreal. We were all on the same tables , dining at the award show. I mean , fact is, Britney has been an icon during the largest part of my childhood. She was up there breaking records with her hit singles . I bet all my friends know lyrics to atleast two of her songs. Like it or not. Its like the era of backstreet boys and nsync. She was receiving the fragrance beauty award for her latest perfume line and so i guess i went to get a whiff of that and congratulate her . Samuel L Jackson and i share the same team, and so this meeting was pending for a while. What can i say, am just a huge fan. And he loved my performance from my film vic and abdul. So that was one of the best compliments i have received in my life. Somethings are just best experienced i guess. I told him i hope i meet him on a set next time. Working together. So i’ll leave it at that for now.”