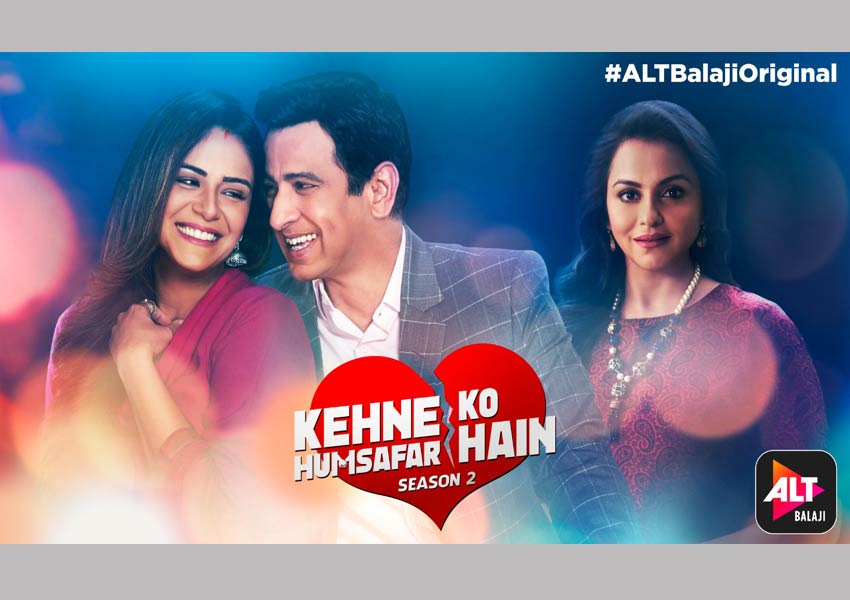 Kehne Ko Humsafar Hain is back with its third season. ALTBalaji and ZEE5 announced the new season by revealing a motion poster of the series. Launching on 6th June 2020, the show launch announcement brings an end to more than a year of anticipation amongst viewers. The show will see stalwarts of the Indian television industry including Ronit Roy, Gurdip Kohli Punjj, Mona Singh, and Apurva Agnihotri, much to the excitement amongst fans around the country. The first two seasons of the show were highly successful and received immense love from the audience. One can’t wait to know what happens in the life of Rohit, Ana, and Poonam in season 3.

Commenting on season 3, Ronit Roy quipped, “The first two seasons of Kehne Ko Humsafar Hain were very exciting to shoot and I took great pleasure in portraying the role of Rohit Mehra. The audience reaction was thunderous even if I have to say it myself. KKHH3 for me has transcended the boundaries which housed the earlier seasons. Like they say “Hitting the ball out of the park”. The third season of KKHH has turned out to be quite a spectacular journey for me as I discovered different shades of Rohit Mehra which maybe existed in his deepest emotions. I have no doubt that the audience will feel the same. As always, I’m grateful to Ekta (Kapoor) for entrusting me with such exciting and challenging roles which have always made me grow as an actor. I would like to thank the audience for showering upon their love and support to the last two seasons thereby making the franchise such a success. I am certain that the audience will share the same enthusiasm and fervour while watching KKHH3 as we felt while shooting it.”

The second season saw the three protagonists (Gurdip, Mona, and Ronit) standing at different crossroads in their lives. Rohit (Ronit Roy) has been shattered and angry with his love never being enough for Ananya (Mona Singh) and Poonam (Gurdip Kohli). While Poonam sets out on her journey to find herself and love once again, Ananya chose to concentrate on her dreams and ambitions. The compelling web-series ended with Ananya getting to know of Poonam and Rohit’s intimate night and hence walking out of Rohit’s life. With this sudden turn of events, it remains to be seen what lies next in the lives of Ana and Rohit. Will things remain the same or change for good? Will the couple who loved each other immensely and fought against all odds survive this storm or despise each other forever?

Be ready to witness the third instalment of this franchise streaming from 6th June on both ALTBalaji & ZEE5 apps.

Stay tuned to ALTBalaji and ZEE5 apps for more updates