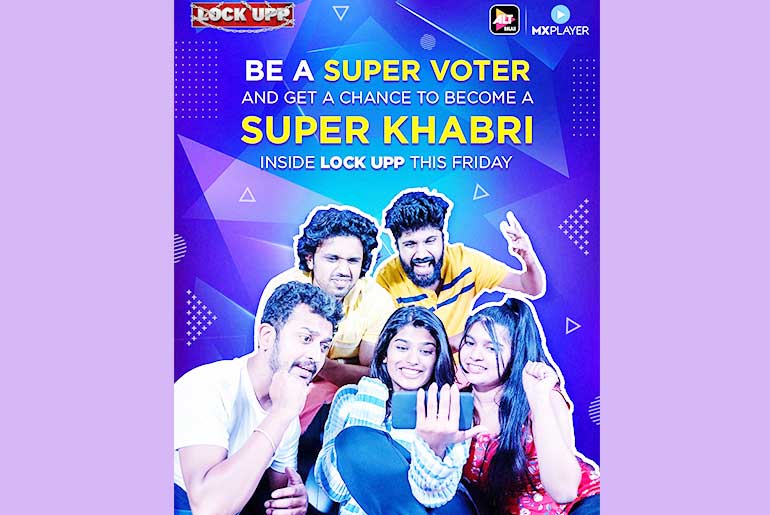 MX Player & ALTBalaji differentiated captive reality show ‘Lock Upp’ hosted by actress Kangana Ranaut has been in the news since its launch in February 2022. The show that is also streamed on ALTBalaji has successfully managed to garner 100MN views within 19 days of its release. To create a user experience as unique and exclusive as the content itself, MX Player & ALTBalaji has introduced two new features: Super Voting/ for Loyal and Super Fans and Khabris on the apps. Other features that will soon be introduced on the app are the Audience Suggestion Poll and Contestant Chat etc. Additionally, MX Player & ALTBalaji will unveil the highly engaging Appeal Box for a wholesome interactive experience.

An ALTBalaji & MX Games innovation, Prediction gives audiences a chance to predict and win. For example the accurate winning prediction, team captain prediction or an elimination prediction will help users regularly earn points and prizes. The results will be announced on the show.  This interactivity feature increases the chances of audience involvement in the show and helps them stay connected to their favorite contestants. Similarly, the audiences can save their favorite inmates on the show through ‘Voting’.

Interactivity segregates the users into Super fans basis their engagement levels. The Super Fan will be at the sole discretion and option of both the companies, wherein 1 vote of the Voter shall be equivalent to 10 votes. Such voters will be identified by ALTBalaji & MX Player using their viewership data and these voters will also be able to do their normal voting apart from super voting. 1 selected SUPER VOTER each will enter as Khabri on Thursday for MX Player & Friday for ALTBalaji.

Speaking on the new features, Mr. Karan Bedi, CEO, MX Media said, “At MX, we are always attempting to entertain our audiences with exciting and unique concepts. Our user-first approach in offering such content has made MX Player India’s largest entertainment platform. Our latest hit reality series, Lock Upp has something for every user. We have introduced dynamic interactivity so that they get a chance to really get involved with the contestants and increases the likelihood of building a long-term connection with them. To ensure our proposition succeeds, we believe in giving people more of what they love to build compelling connections.”

“A user who predicts elimination before it starts builds an emotional investment in the outcome and creates their unique personal journey with their favorite contestants on the show. We have lots more in store to create an entertaining real time engagement for our users,” he adds.

Speaking about the audience interaction content, czarina Ekta R Kapoor shares, “AT ALTBalaji, the focus is always on introducing content that appeals the mass audiences. With Lock Upp, An ALTBalaji Production, we have created multiple milestones with massive audience engagement topping the lists across all platforms. Extra-ordinary audience interactivity is a USP that ALTBalaji is looking to innovate even further. On the same lines we are happy to introduce the concept of Super Fans where the aam aadmi of India will have super-power to decide the fate of the contestant in the show and we will also give a Super fan a chance to become a Khabri and intermingle with the contestants. To connect the audiences directly to the show, there is much more in store for everyone to stay engaged.”

As user attention becomes even more limited, and in a competitive market, audiences will make their choices and be drawn to the best digital experiences. With fans participating and building a sense of togetherness, the digital experience on ALTBalaji & MX Player will surely become a top-of-mind source of entertainment and community interaction.