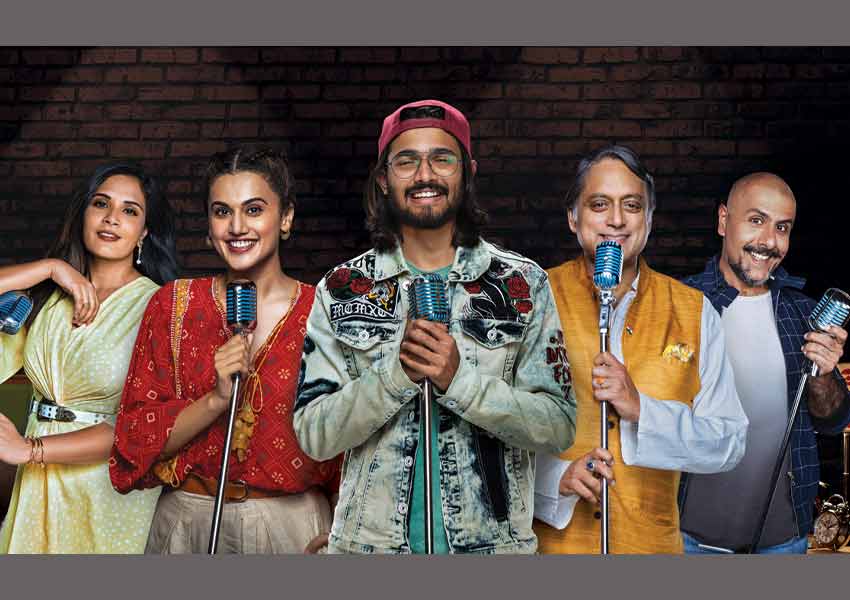 Amazon Prime Video today unveiled the trailer of its latest unscripted Amazon Original Series One Mic Stand. Created and hosted by ace comedian Sapan Verma in collaboration with Only Much Louder (OML), One Mic Stand is a unique concept, where renowned faces from varied walks of life try their hand at Stand-Up Comedy for the very first time. The five-episode Amazon Original Series showcases celebrities such as Youtube Creator Bhuvan Bam, singer & music composer Vishal Dadlani, leading actors Richa Chadda and Taapsee Pannu, and politician Dr. Shashi Tharoor push boundaries and offer a humorous take on a variety of  topics, while being mentored by top comedians to perform in front of a live audience.

One Mic Stand has these celebrities stepping out of their usual roles and challenging the status-quo as they get coached by some of India’s wittiest comedians, including the likes of Rohan Joshi, Ashish Shakya, Zakir Khan, Angad Singh Ranyal and Kunal Kamra, in the craft of Stand-Up comedy. The choice of celebrity & comedian pairing is also uniquely special as they have been paired together keeping ideologies and personal backgrounds in mind, which in itself adds additional flavor to the show. Starting November 15, Prime members across 200 countries and territories can stream all five episodes in a binge format, exclusively on Amazon Prime Video.

Vijay Subramaniam, Director and Head, Content, Amazon Prime Video India, said “We continue to receive an overwhelming response to Amazon Prime Video’s comedy offering and this appreciation drives us further to bring to our customers newer formats in this genre. One Mic Stand is a unique, fresh concept and we are happy to collaborate with Only Much Louder (OML) to present yet another disruptive take on stand-up comedy. Our customers have an exciting opportunity to see some of their favourite celebrities in a never-seen-before avatar and we are certain that audiences will love this new dimension of Stand-Up comedy”.

Dhruv Sheth, Managing Partner, Only Much Louder, said “We are excited to continue our association with Amazon Prime Video with One Mic Stand, an innovative new comedy show created and hosted by Sapan Verma. The Amazon Original Series shows the intricacies involved in the art of stand-up comedy and challenges people famous in other art forms to try it in front of a live audience. We are hopeful that audiences will both enjoy the show and see a new side of their favorite comedians and celebrities.”

Sapan Verma, Comedian and Showrunner, said “The concept of One Mic Stand came to me many years ago and I’m glad that Amazon Prime Video were so supportive in making it happen. I think the idea of seeing your favorite people in a new vulnerable position is always endearing. Basically, I’ve got famous celebrities so that the show gets the views and top comedians to ensure the show is funny, so that I can just sit back and not do much.”

Chulbul Pandey makes his digital debut on Prime with Dabangg 3