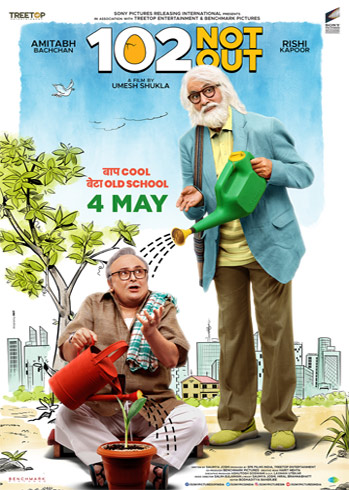 Currently on a promotional spree for 102 Not Out, Amitabh Bachchan and Rishi Kapoor sure seem have taken marvelously well to the existing millennial trends! From million dollar pouts to social media trends, the actors are seen in a series of videos promoting the film in the most unique way possible.

The duo will surely give the youngsters a run for their money with the way they have used the current trends. With the first video ‘Outfit of the day’, Amitabh Bachchan is seen advising his old school son- Rishi Kapoor! On the Outfit of the Day! Redefining fashion for us, we must say, the duo are totally giving us some style goals! The second video has left us all in doubt about our pouting capabilities. Amitabh Bachchan is seen giving some hilarious pout lessons to Rishi Kapoor and we can’t get enough of it. In the 3rd video, Mr. Bachchan is giving Rishi Kapoor a tutorial on ‘Facebook Live’ and it’s many varied features followed by Fitness being the new cool!

Looking at these videos, who could ever deny that Old is not the new cool?

We can’t wait to receive the real dose of entertainment from the Cool Baap and Old School Beta on the big screen!

102 Not Out’, A Sony Pictures Releasing International Presentation and worldwide distribution, is produced by SPE Films India, Treetop Entertainment and Benchmark Pictures. The film releases on May 4.

Rishi Kapoor Croons For The First Time In 102 Not Out!
MediaInfoline Apr 13

Rishi Kapoor Croons For The First Time In 102 Not Out!