&flix is all set to premiere ‘Resident Evil: Vendetta’ 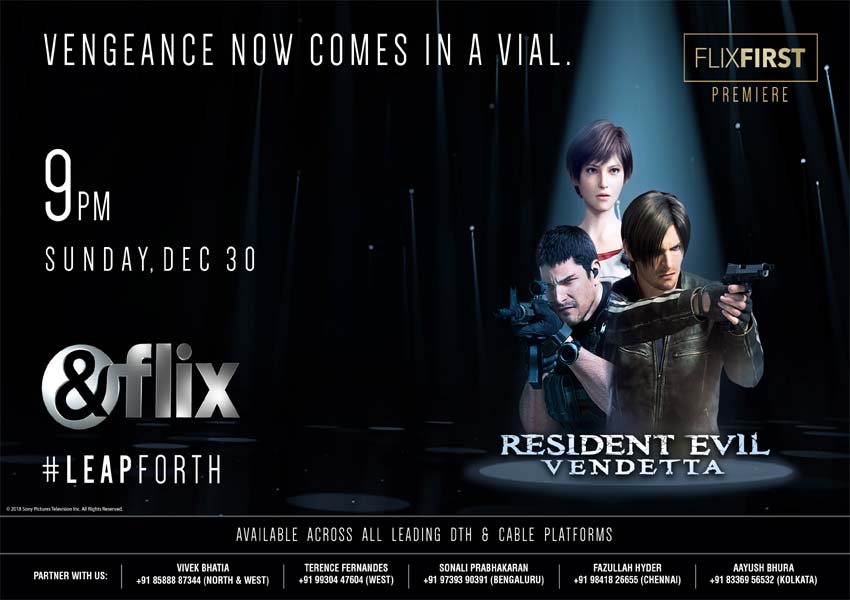 Resident Evil: Vendetta, a 3D bio-punk action horror film is all set to be the next Flix First Premiere this Sunday, December 30 at 9PM on &flix. The film that is directed by Takanori Tsujimoto, makes part of the Resident Evil franchise, set in the same universe as the associated video games. It features the characters Chris Redfield, Leon S. Kennedy, and Rebecca Chambers and is the third movie, after Resident Evil: Degeneration and Resident Evil: Damnation.

The story of Resident Evil: Vendetta is gripping, entertaining and highly action packed. Just like the films that &flix stands for, the characters of this film #leapforth to bring out the heroic side to them. This film is the story of agent Chris who tracks down ‘Death Merchant’ Glenn Arias who was a former CIA Agent. His vendetta is against the US government for killing his friends and family in a drone strike. Chris and his team are ambushed by a group of Zombies in a mansion in Mexico, which is where one of their agents Cathy had been kept hostage. He ends up being the lone survivor and realizes that Cathy has been converted into a zombie under Glenn Arias’ control. Meanwhile, professor Rebecca who was the only survivor in the mansion attack discovers the deadly virus that was turning everyone into a zombie. She thereby formulates an antidote to the virus and saves herself.

Eventually, after many turn of events, Arias intends to make Rebecca his wife, while Chris is given an ultimatum to save her. After the great escape, Chris rescues Rebecca. Yet that is not all, there is someone else who is behind Chris and Rebecca. Only the end will reveal as to what is in store for the two.

#Leapforth into the world where revenge leads to war as &flix is all set to premiere ‘Resident Evil: Vendetta’ on December 30, Sunday at 9PM!

Find reasons to smile on this International Day of Happiness