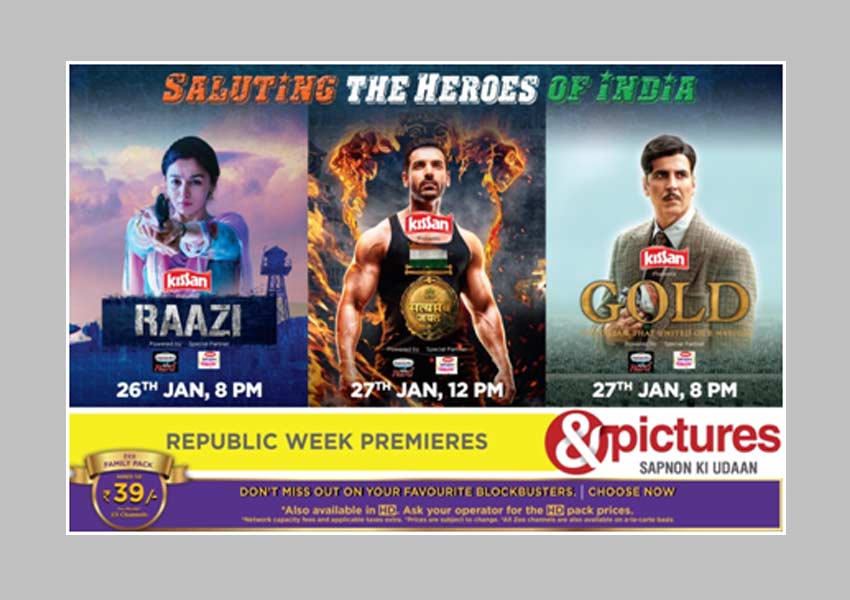 Celebrate the Republic weekend on a high note as &pictures brings to its viewers three blockbuster movies on 26th and 27th January. The channel has planned a line-up of entertaining movies that will invoke the patriotic feelings in its viewers. These movies are not just stories of freedom and struggle but also of persistence,leadership, sacrifice and battles.

Directed by the celebrated filmmaker Meghna Gulzar and depicting the events preceding the Indo-Pakistani War, Raazi is the official adaptation of the novel Calling Sehmat. The movie features Alia Bhatt along withVicky Kaushal, Rajit Kapoor, Shishir Sharma and Jaideep Ahlawat in crucial roles. This patriotic film will premiere on 26th January at 8pm and see the real life mother-daughter duo – Alia Bhatt and Soni Razdanshare screen space for the first time. Milap Zaveri’s Satyamev Jayate is an action entertainer that narrates the story of a cold-hearted killer who is on the loose. The names on his hit-list have two things in common – they are all policemen and each one is reputedly corrupt. Starring John Abrabham and Manoj Bajpayee in the lead along with debutant Aisha Sharma in a pivotal role, the thriller will premiere on 27th January at 12pm. Directed by Reema Kagti, the sports patriotic film Gold features Akshay Kumar, Mouni Roy, Kunal Kapoor, Vineet Kumar Singh, Amit Sadh and Sunny Kaushal essaying pivotal characters. This film is not just a film on hockey, the story also reminds us of the painful reality of partition and how it brutally tore apart our nation.

This Republic weekend &pictures has a line-up of film premieres to keep their audiences glued to the television screen!