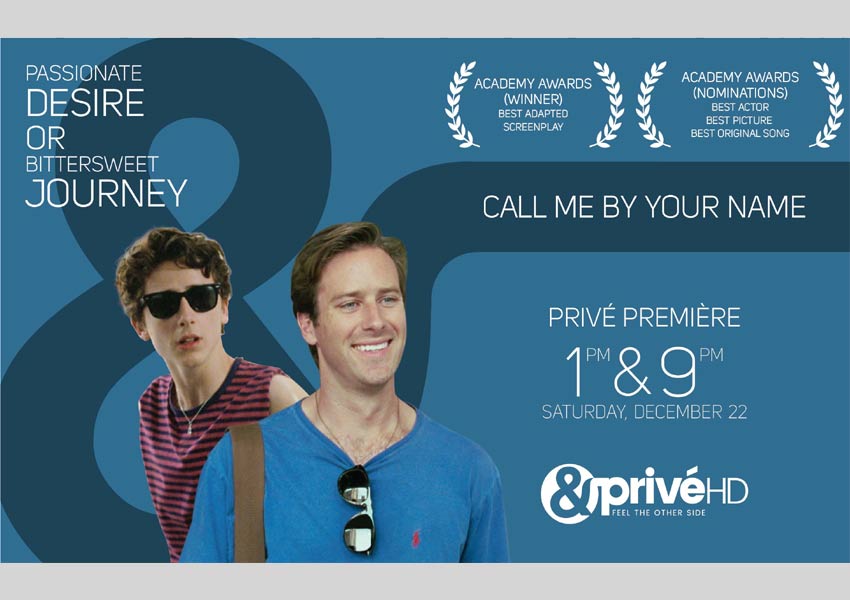 &PrivéHD presents a poignant love story, Call Me By Your Name, on Saturday, December 22 at 1 PM and 9 PM. Directed by Luca Guadagnino, the movie is based on a novel written by André Aciman which takes the audience through a summer rendezvous between a 17-year-old and 24-year-old young adult. Timothée Chalamet plays the lead character of Elio Perlman along with Armie Hammer who plays the role of Elio’s father’s research assistant Oliver and the film also stars Michael Stuhlbarg, Amira Casar, Esther Garrel and Victoire Du Bois.

Watch this story and you will realise there is an Elio in all of us; who goes through an intense life changing encounter and comes out of it filled with love and pain.

The young Elio meets his father’s research assistant Oliver in Italy in the summer of 1983. Annoyance, elusiveness and eventually acceptance and maybe just a hint of jealousy – Elio feels all this when he first meets the ever so charming Oliver. However, as love and attraction would have it, Elio starts gravitating towards Oliver.

As Elio decides to show Oliver around his father’s town little by little, a timid relationship grows between Elio and Oliver and there blossoms a flower of unexpected bond and fresh emotions start to grow. Elio’s first love in its purest form grows stronger and the unknown exhilaration takes flight. However, reality catches up too soon and it is time for Elio to let Oliver return to his world where there is no place for all-year summer or complex emotions.

Passionate desire or a bittersweet journey – Feel the other side of Call Me By Your Name as the film premiereson Saturday, December 22 at 1 PM and 9 PM only on &PrivéHD.