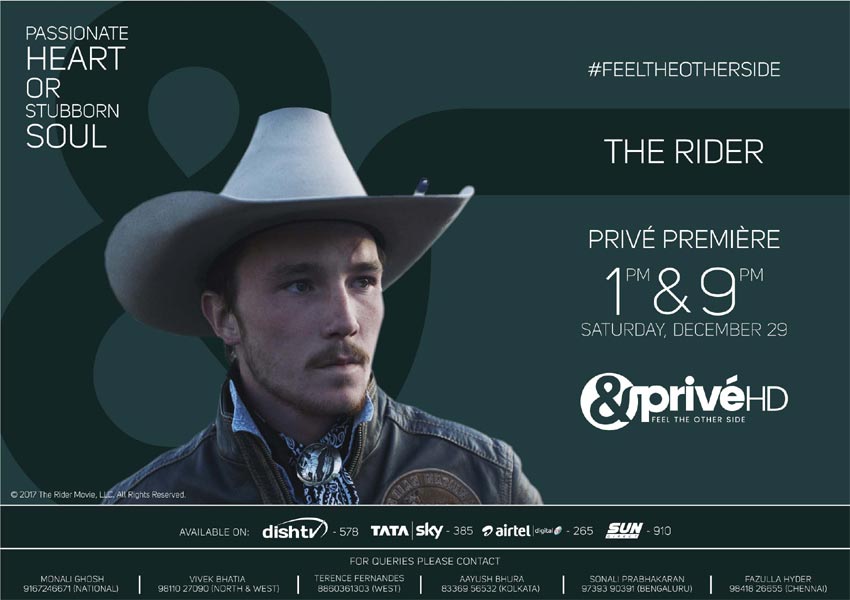 &PrivéHD brings you the journey of a Cowboy who is on a path to get his life together and find a new purpose to living with The Rider on Saturday, December 29 at 1 PM and 9 PM. Written and Directed by Award Winner at Cannes Film Festival Chloé Zhao, the movie is based on a true story of Brady Jandreau himself.

The life of a Rodeo star who meets with an unfortunate accident which forces him to leave his one true passion, horse riding. Brady Jandreau plays the character of Brady Blackburn as the lead along with Tim Jandreau and Lilly Jandreau as Tim and Lilly Blackburn. The film is loosely based on the real-life story of Jandreau, who is a cowboy and loves horse riding, having met with a life-threatening accident that changed his life. The Rider has won Gotham Independent Film Award for Best Feature and Art Cinema Award. It also appeared in the top ten best independent films’ list by National Board of Review. It premiered at the Director’s fortnight section at the Cannes Film Festival in 2017.

It is often said that an individual’s life takes flight when he is truly at peace with his life.  Brady Blackburn’s story can easily pass of as a dedication to life. Having grown up country side, Brady was always surrounded by horses and thanks to his parents, horse riding became more than just a hobby through his childhood years. When Brady meets with an unfortunate accident affecting his head, his career inevitably is put on hold. Gathering the strength to face life once again, Brady turns to his instincts for mere survival as everything he loved slips away like sand through the fingers.

Brady’s world only consists of horses and horse riding and now he comes to a pivotal stage of life where he must start fresh and live a different life. Brady’s decision is going to change his life, will he choose existence over his passion?

Feel the other side of our rodeo rider’s life as The Rider premieres on Saturday, December 29 at 1 PM and 9 PM only on &PrivéHD.