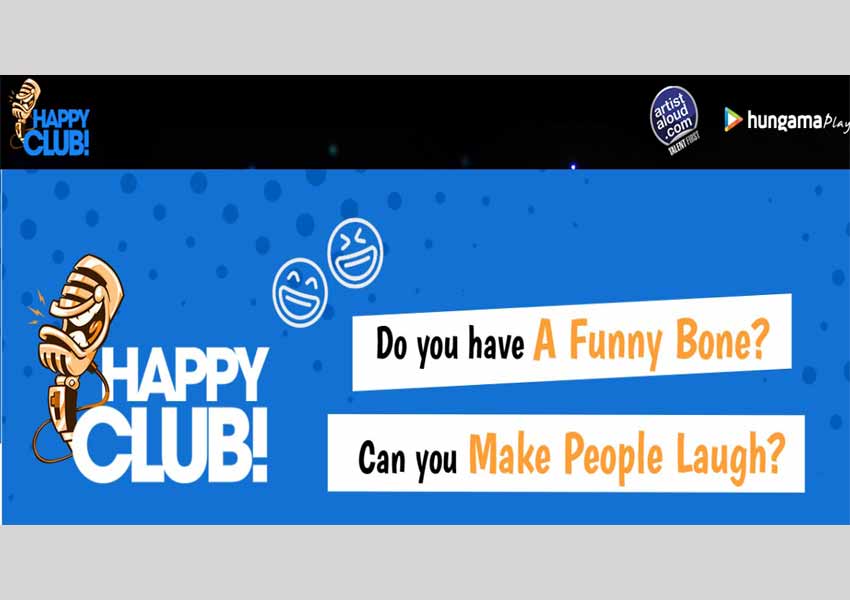 Artist Aloud has announced ‘Happy Club’, a digital talent hunt for budding comedians across India. The talent hunt seeks to discover comic talent across English, Hindi, Marathi, Gujarati, Tamil, Bengali and Punjabi, giving a chance for fair representation and participation to all individuals adept in either of the 7 languages. Language-specific winners will be chosen by a jury comprising renowned comedians – Rajiv Thakur (Hindi), Nitin Mirani (English), Jaswant Singh (Punjabi), Manan Desai (Gujarati), Sumedh Shindey (Marathi), Mervyn Rozario (Tamil) and Anirban Bhattacharya (Bengali). The talent hunt provides a unique opportunity to all winners to shoot a digital special each that will be available to stream on Hungama Play and Artist Aloud.

Aspiring candidates can participate in the contest by following 4 simple steps – downloading the Artist Aloud app on Google Play store, recording a funny performance of themselves in either of the 7 languages, uploading it using the app and finally, sharing it with their friends and family asking them to vote. Candidates can also use the microsite – www.artistaloud.com/happyclub and upload a video or a YouTube link of themselves performing.

Once uploaded, the videos are available for public viewing and voting. Five videos in each language with the maximum number of public votes will be shortlisted and judged by the jury member representing the respective language. All candidates would be required to upload their videos by 10th November 2018, while public voting will remain active till 19th November 2018. The jury round will be conducted on 20th November 2018 with the winners being declared on 23rd November 2018.

Talking about the talent hunt, Soumini Sridhara Paul, Vice-President, Artist Aloud, Hungama Digital Media Entertainment Pvt. Ltd. said, “Proliferation of digital technology has disrupted the content creation and curation space in India. It has blurred geographic and linguistic barriers and made it easy to create and consume content digitally. Given the power and reach of the medium, it has become important to create platforms that enable people to showcase their talent in a language that they are most comfortable with. Our aim with Happy Club is to allow people to showcase their funny side through their performances without having to worry about writing, production value, editing, and scale as we will assist the winners with these aspects. We are certain that by following a multi-lingual format, Happy Club will help us in finding exceptional talent in comedy that happens to be one of the fastest growing entertainment verticals in India.”

As a part of the talent hunt, Artist Aloud is also working with ATKT.in, a digital platform that seeks to promote original content created by college students, to find comic talent in each of the 7 languages at a collegian level as well.

Happy Club’s jury includes Nitin Mirani who will judge the entries in English. Recently awarded ‘Comedian of The Year 2017’ at the ‘Esquire Middle East Man At His Best Awards’ in Dubai, Nitin has over 1500 shows worldwide to his credit and has also won the title of Laugh Factory USA’s ‘Top 5 Funniest Person in the World 2015’ in Las Vegas. Hindi entries will be judged by Rajiv Thakur, a well-known name in the television and film industry. He rose to fame with ‘The Great Indian Laughter Challenge III’ and has since worked in multiple films and shows, including ‘The Kapil Sharma Show’. Known for his mimicry skills, Sumedh Shindey will judge the Marathi entries. Spotted through his performance in the ‘Laugh India Laugh’ competition, his talent for mimicry has won him a huge fan base. Manan Desai, one of the founders of the Comedy Factory will judge the entries in Gujarati. He has also been a part of ‘Comedy Nights Bachao’ and ‘Comedy Dangal’ – both popular TV shows. Jaswant Singh, who won the national comedy show ‘Hasde Hansde Raho’ at the age of 24 in 2006, will judge the Punjabi entries. Known for his ability to mimic over 150 actors and singers, Jaswant has also been a part of various TV shows including ‘Chote Miyan Bade Miyan’. An online sensation since his first YouTube video release, Mervyn Rozario will judge the Tamil entries. Revered for his spontaneous one liners and clean comedy, his humour is relatable and is appreciated across India. Anirban Bhattacharyya will judge the Bengali entries. The winner of the first ever open mic at The Comedy Store in Mumbai, Anirban dons multiple hats. An actor in films and TV, he has also been a voice-over artiste and is soon going to be a published author as well.

Aspirants can upload their entries now on the Artist Aloud app (Android) and the microsite – www.artistaloud.com/happyclub.

Artist Aloud Forays Into Original Content beyond Music
MediaInfoline May 17