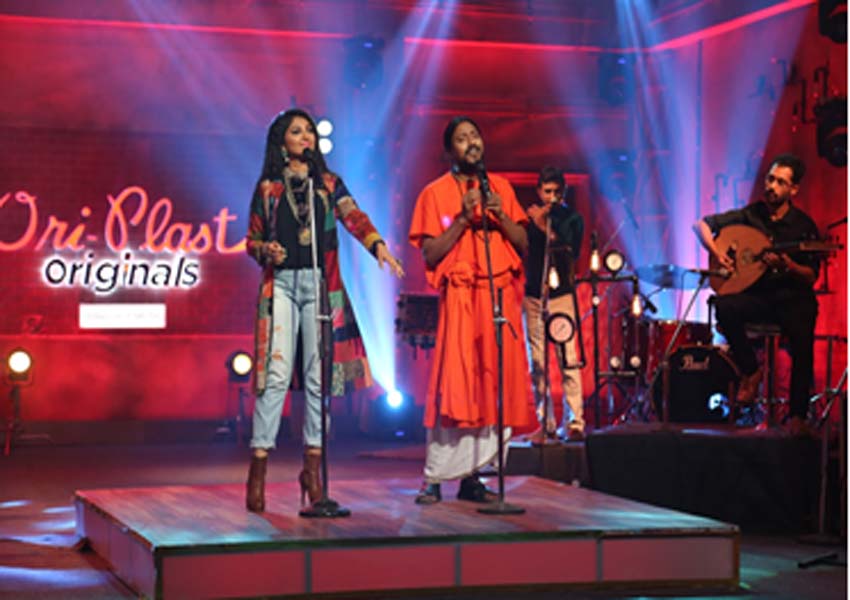 Presenting Nodi Bhora Dheu, an electro-folk fusion, featuring the very talented Bhoomi Trivedi along with one of Bengal’s most popular Baul artistes, Lakshman Das. The song represents the journey of individuals from worldly addictions (maya) to freedom (surrender).

Kinjal – Sam B, the composers of this song have introduced some fresh lyrics to a very popular Bengali folk and narrated the story of a young girl who is lost in the world of addictions and finally manages to listen to her heart, that tells her to surrender to the almighty. The treatment of the song is fresh, and the trance soundscape is surely going to make you groove.

Bhoomi Trivedi, excited about singing her first Bengali song, exclaimed, “The first bengali song for me is absolutely a privilege for me. SVF came up with a new concept of blending original and folk specially in my song Nodi Bhora Dheu is a surprise element packaged with Baul sangeet. The ensemble of the concept impressed me so much that I became intrigued to know more about Bengali folk as a lover of versatility. Oriplast Originals is going to play an important role as a trend changer in terms of eradicating the concept of remakes and flow with the river of the richness of original compositions and promote and inspire Independent Music and Artistes.”

Kinjal, one of the composers of the duo, said, “As creators, Sam and I have tried to explore and experiment on merging a philosophy musically. Philosophically speaking of a human being’s inward journey from darkness to light. Musically we have fused Electronic Dance Music (EDM) with the music-philosophy genre called Baul.”

Sam added, “Nodi Bhora Dheu is a unique and groovy electro-folk fusion, featuring the talented Bhoomi Trivedi, along with one of Bengal’s most popular Baul artistes, Lakshman Das. As the composers of this song, we, Kinjal – SamB, took up the challenge to fuse Bangla Baul Gaan with the Trance genre of music, to bring it closer to the young audience. It wouldn’t be possible to bring this song out to the public, without SVF Music creating a beautiful format like Oriplast Originals. It was indeed the need of the hour, where original music from Bengal could be promoted. The experience to work with SVF was also fabulous. Their involvement and expertise on the medium to make a song more beautiful and more relatable to the audience is commendable.”

Spearheaded by SVF and Ori-Plast Limited, Oriplast Originals is the biggest Bengali music collaboration with 16 artistes from all over India along with 7 composers. These two leading companies, in their own sectors, have joined hands to create Bengal’s first branded original content bringing forth 10 songs in Season 1 to pipe hot music into our playlists.

Shake a leg to this mind-numbing number – here