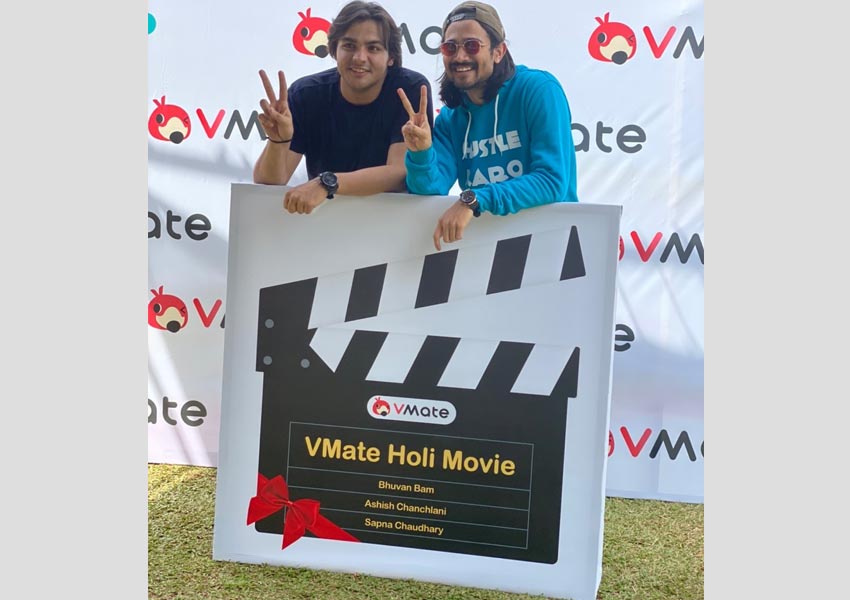 In a bid to standout and garner more attention in this year’s Holi, India’s top YouTubers Bhuvan Bam and Ashish Chanchlani will be together for the first time, to present something new to their fans. The two YouTube stars, along with Haryanvi performer Sapna Chaudhary of Bigg Boss fame, will feature in a special Holi film, produced by VMate, a trending short video app.

Popular for their quirky content, both the YouTubersare seen as competitors and always vying for the top position. Bhuvan Bam, the first solo Indian YouTuber to cross the 10-million and 15-million subscriber marks, tops all YouTubers’s list and endorses a few established products on television. Ashish Chanchlani on the other hand is the mass favourite, loved by audience for his hilarious and slapstick comedy.

Talking about the association, VMate Associate Director Nisha Pokhriyal said, “Holi is celebrated in India with great fervour and to make the festival even more special for our users, we are bringing country’s top YouTubers Bhuvan Bam and Ashish Chanchlani together for the first time to make a short film together. Inclusion of Sapna Chaudhary in the campaign would be an add-on to the fun dose. We are very excited about the magic outcomes they three created together and this film is just a start of VMate’s Holi campaign. I can assure our users that VMate’s Holi campaign would be an unprecedented experience for them.”

With similar exciting campaigns in the past, VMate has become a rage among youth across India. Users have won bumper prizes such as car, scooty, latest smartphones, etc, through their participation in the campaigns. Recently, VMate concluded its #HappyValentinesDay campaign in collaboration with Sunny Leone, which witnessed creation of more than 8.5 million videos. Even during the #VMateFilmistan campaign, over 7.8 lakh people won prizes worth Rs 2.65 crore.VMatealso gained popularity through its association with Nach Baliye Season 9. Many VMate creators, who are common people, are earning money with the help of videos and transforming their lives.