Bidaay Byomkesh: End of an era or a new begining; Official trailer Out Now

SVF is unmasking surprises with their SVF Stories bouquet of 25 films this year. The latest one is an epic story of Byomkesh Bakshi titled “Bidaay Byomkesh” (literal translation being “Goodbye Byomkesh”) directed by Debaloy Bhattacharya. However, this film comes with a twist; Byomkesh is aged as revealed in the first look poster released by SVF during the announcement of the film. Abir Chatterjee, known for portraying the sleuth in the last couple of films produced by SVF, will be again seen playing this pivotal role.

As a follow up to the brimming excitement which was caused after the poster reveal, SVF also released a teaser which builds up the suspense. The teaser starts with a reference to the birth year of Byomkesh – 1932 along with names of popular stories penned by legendary Bengali writer, Sharadindu Bandopadhyay like “Rakter Daag”, “Shajarur Kanta”, “Chiriyakhana”, “Bonhi Patanga”, “Chorabali” and fast forward to many more names ending with a glimpse of Byomkesh Shomogro (the book of Byomkesh stories). Cut to 2018, Byomkesh (Abir Chatterjee) is an old man now, and this is an untold story of the Satyanweshi. We even see a flashback scene of Satyabati (Sohini Sarkar). The teaser concludes with Byomkesh lighting a matchstick and the audience will get to see the full face of the aged Byomkesh Bakshi for the first time increasing the enthrallment of the film.

Bidaay Byomkesh, slated to release in July of 2018, is the story of an aged Byomkesh in hibernation passes on the baston of Satyanweshi to his grandson, Satyaki Bakshi. Is it the end of the saga of Byomkesh or is it a new beginning for the iconic detective? A journey of the human being and the maestro Byomkesh Bakshi as he struggles to find himself. 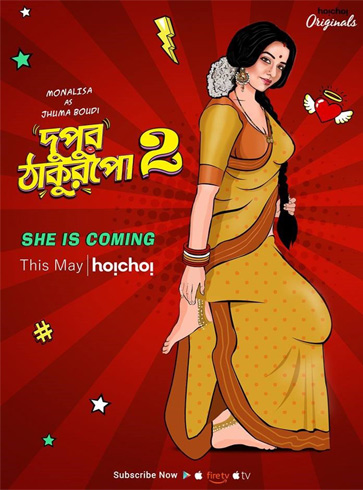