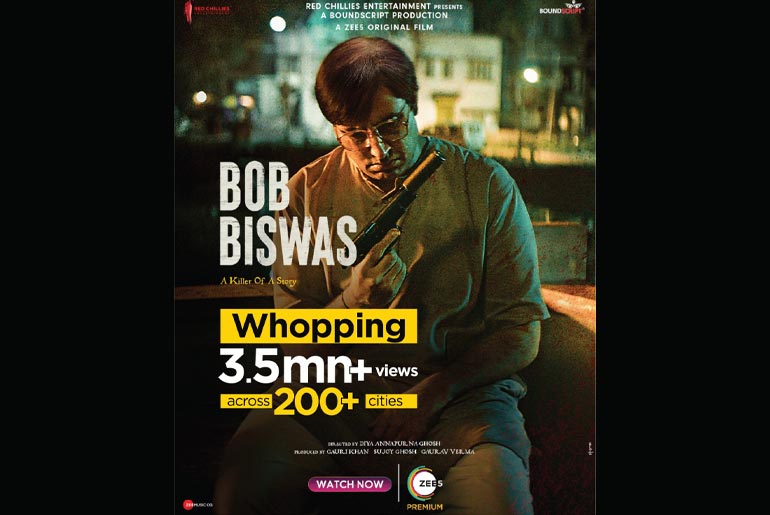 Bob Biswas has been appreciated by fans and critics alike, with an IMDB rating of 7.2 and over 3.5mn+ views over its first weekend.

Abhishek Bachchan starrer highly anticipated film ‘Bob Biswas’ has finally hit the OTT platform, ZEE5 on December 3. The film, directed by Diya Annapurna Ghosh and written by Sujoy Ghosh, is a spin-off to the 2012 crime thriller ‘Kahaani’. Soon after the release, the film received spectacular reviews from the fans who were amazed to see Abhishek Bachchan’s transformation to play the titular role.

This is the first time the fans got to see Abhishek in a never-seen-before avatar in which his look is almost unrecognisable as a semi-bald and overweight middle-aged man who is an undercover hitman for hire. Abhishek refused to put on a prosthetic stomach and decided to put on weight for his role in Bob Biswas as he wanted to look as authentic as possible. He weighted over 100 kilos during the shoot however he was happy with the outcome.

In addition to Abhishek Bachchan, the supporting actors like Chitrangda Singh, Samara Tijori, Tina Desai, Paran Bandopadhyay, Purab Kohli and many others are also being lauded for their acting in the film.

‘Bob Biswas’ encapsulates the journey of Bob Biswas, a middle-aged hitman-for-hire who comes out of a prolonged coma not being able to remember any details about his life and his past including his own family. As he tries to remember his identity, episodes from his past come alive, putting him in a moral dilemma between the history of his own deeds versus his newly developed sense of right and wrong.

Directed by Diya Annapurna Ghosh, Bob Biswas is a ZEE5 Original Film, produced by Sujoy Ghosh, Gaurav Verma and Gauri Khan (Red Chillies Entertainment). It is streaming now on ZEE5 so watch it now if you haven’t already.