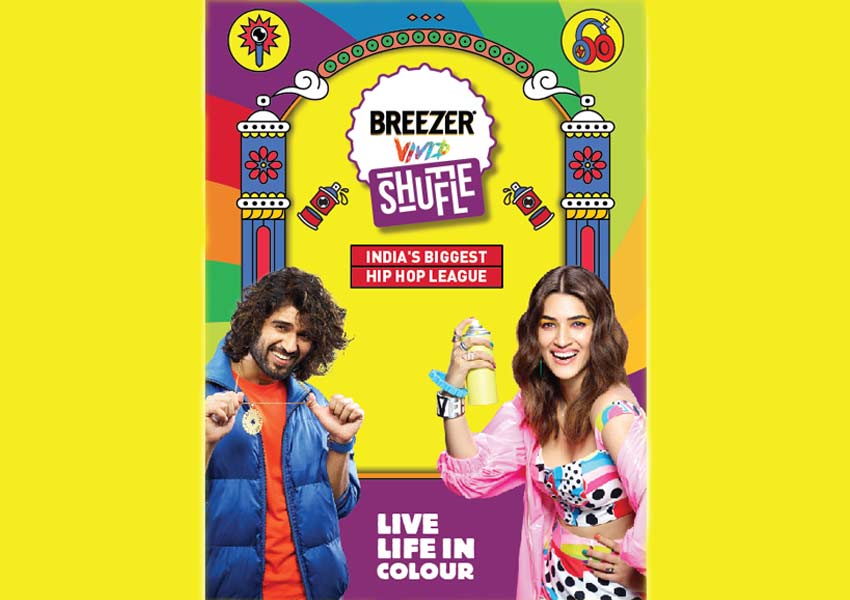 India’s biggest hip-hop festival, BREEZER Vivid Shuffle, has returned with Season 4 post three successful seasons of the most epic dance battles in the country. The festival is taking a step ahead and introducing India’s first-ever hip-hop league. This digital edition has been conceptualised and produced by Only Much Louder Entertainment PVT LTD and is not only welcoming b-boys and b-girls but also rappers, artists or anyone who wants to make waves in India’s hip-hop scene. Including all elements of hip-hop across music, art and dance, this festival will begin from 6th November and will be led by ambassadors Kriti Sanon and Vijay Devarakonda. Various talents will be scouted from all over the country by digitally travelling across regions for 5 months.

This league will be conducted as four teams line up with participants from five distinct fields of music, art and dance and four other league ambassadors namely, Kr$na, JordIndian, Shantanu Maheshwari and Piyush & Shazia. Furthermore, during the festival, participants will receive an opportunity to brush up their skills, through the School of Shuffle workshops and masterclasses held by experts. The timelines mention 6th November as the commencement date of registrations through Insider. This will continue till 21st December, after which the virtual auditions begin on 17th January. A cash prize of INR 2 Million will be awarded to the winners.

Kriti Sanon expressing her excitement commented that she had always loved dancing even before she started acting and she believes hip-hop to be one of the coolest dance forms. Expressing her gratitude, she said she is immensely happy that she gets to be a part of this colourful and disruptive movement. Further, she added there are so many talented dancers out there who wait to showcase their talent on a platform like BREEZER Vivid Shuffle. Kriti says she is super excited to see the crazy talent that gets discovered this season.

Vijay Devarakonda puts his love towards hip-hop into words and remembers that he used to be fascinated by the music, the fashion, culture, graffiti since he was young. He says he used to be hooked to watching international dance shows as he always wished that he could pop, lock, krump and freestyle like the dancers on the show. He shares that till today hip-hop music is his go-to music for his workout sessions and that he is very excited by the BREEZER Vivid Shuffle League, which is bringing all the things people love about hip-hop on one platform. He added, he is looking forward to the great talent and a great show.

“For three consecutive years, BVS has been associated with hip-hop and given opportunities to youth across the country to showcase their talent. With the rapidly changing consumer behaviour this year, we wanted to adapt the platform to continue being relevant for our consumers. Going digital allowed us to explore hip-hop culture as a whole and lend artists a platform beyond dance where they can showcase their skills across many subgenres of hip-hop. With everything we’ve got planned, we’re positive that Season 4 will see some of the greatest talents in the country come together and Live Life in Colour!” said Arti Hajela, Senior Brand Manager, RTD, AMEA at Bacardi.

“The biggest question relating to this year’s edition of BREEZER Vivid Shuffle was: “What can we do to grow this community and make it accessible to an even larger audience?” So, we built upon the central aspects of the festival, namely, freedom of expression, movement and individuality. With the 2020 edition of the festival being digital, plus the expansion of its format from India’s Largest Hip-Hop Festival to India’s First Hip-Hop League, we hope to make it even more inclusive, exciting and successful than ever before,” said Gunjan Arya, Chief Executive Officer, OML

Tags:
Previous Article
Vani Aiyer appointed as the GM, Corporate Communications for Nissan
Next Article
The World Comes To the #IconInTheSky This Festive Season