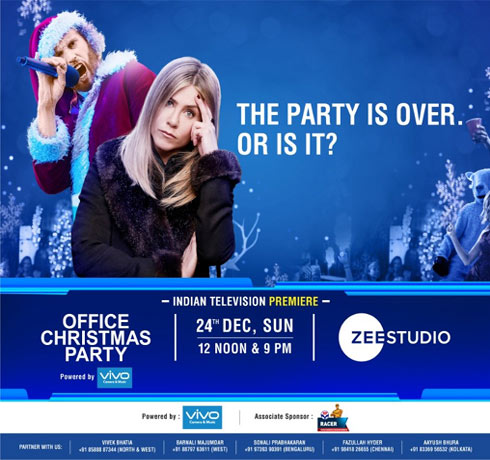 When a Christmas party at work goes out-of-hand, it is just the beginning of a crazy riot! This Sunday, Zee Studio, the ultimate Hollywood movie destination, is all set to ring in the festive cheer with a great dose of madness as it brings the Indian Television Premiere of the movie ‘Office Christmas Party’. The comedy drama which boasts of a star-studded ensemble cast including Jennifer Aniston, T.J. Miller, Jason Bateman and Olivia Munn amongst others will premiere on 24th December 2017 at 12 noon & 9 PM.

Directed by Josh Gordon and Will Speck, the story unfolds when Carol Vanstone (Jennifer Aniston) an uptight CEO of Zenotek, threatens to shut down her brother Clay’s (T. J. Miller) Chicago branch. Clay along with the Chief Technical Officer, Josh Parker (Jason Bateman), rally their co-workers and host an epic office Christmas party to impress a potential client and close a sale that will save their jobs. But the party goes way out of control and this is just the beginning of the mayhem!

The premiere of Office Christmas Party is a part of Zee Studio’s promise of 12 months – 12 premieres offering. Building up the excitement to Christmas season, the channel also curated a special property, ‘Studio Santa’, which brings some crazy and wild movies around the theme of the festival. From 18th to 22nd December at 9 pm, the channel will air movies like American Ultra, The Other Guys, Top Five, Zoolander and Pain & Gain!

So, this Sunday, grab a bucket of popcorn and don’t let the remote down. Catch the Indian television premiere of Office Christmas Party on 24th December 2017 at 12 noon & 9 PM only on Zee Studio!