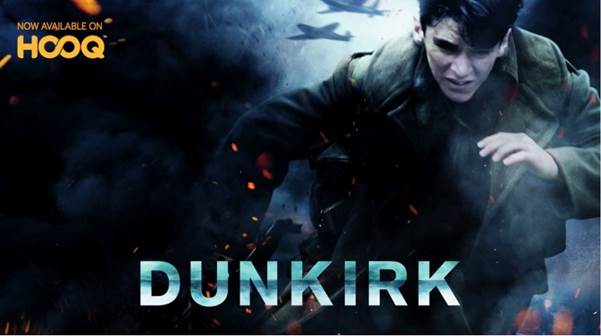 HOOQ – the largest Video on Demand service in South-East Asia, announced the addition of the recently released Hollywood epic super hit Dunkirk by director Christopher Nolan of Interstellar, Inception and The Dark Knight Trilogy fame! Nolan fans can rent this year’s most acclaimed film for just Rs. 59/- (on Android devices) or Rs. 80/- (on iOS devices) exclusively on HOOQ.

This news comes on the back of the recent announcement that HOOQ now provides transactional video-on-demand (TVOD) services in India, giving HOOQ customers access to rent the latest Hollywood movies as soon as three months of its theatrical release. New movies will be available every month from top Hollywood studios including Sony Pictures and Warner Bros. ensuring that the customers can enjoy major titles such as Spider-Man: Homecoming, Wonder Woman and Baby Driver all in the comfort of their home or on any internet connected device of their choice.

The company recently announced its strategic shift to focus only on Hollywood content with offerings from both subscription video-on-demand (SVOD) and TVOD, allowing customers to access Hollywood blockbusters, hot favourites and top rated US TV series such as Supergirl, The Flash, Lucifer, The Big Bang Theory and more at a new pricing of INR 89/- per month which comes with a 30-day complimentary trial.

Salil Kapoor, Managing Director, HOOQ India, said, “Indian audiences are increasingly lining up for Hollywood movies and are attracted to the variety of content that the films offer – fantasy, superhero, science fiction, horror, etc.  In the past year, there has been a robust increase of in uptake of Hollywood movies across genres. However, not all Hollywood movies get a theatrical run in India and even if they make it to the big screen they are limited to only some cities. At HOOQ, we realize this gap and decided to bring more fresh Hollywood blockbuster films to our customers. The release of Christopher Nolan’s Dunkirk on HOOQ is a testimony of our vision to becoming the ‘Home of Hollywood’ and bringing the best experience to our customers.”

Dunkirk is an epic action thriller war film starring Harry Styles and Tom Hardy together with Mark Rylance, Kenneth Branagh and Cillian Murphy, that tells the story of the mass evacuation of Allied troops from the northern coast of France in 1940.  This dramatic depiction and true story of the Dunkirk evacuations from a war-torn beach and harbour at the border of France and Belgium, following the seemingly doomed plight of allied soldiers in World War II and portrays the evacuation from three perspectives: land, sea, and air.

An original screenplay written and directed by Nolan, this materpiece has received glowing reviews in India and across the globe. The fact that Indian soldiers of the Royal British Army played a huge part during the evacuation of Dunkirk in 1940, makes the movie even more special for the Indian audiences.