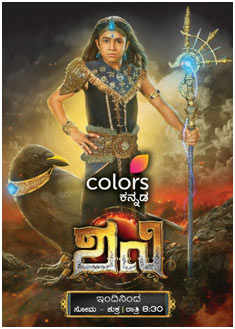 It is believed that life is a loop of infinite events that is inherently linked to Karma or our actions in this lifetime. For centuries folklores have been passed on from one generation to the next to instill a belief of Karma and good doings. Bringing to the audience one of the most captivating narrative of these teachings, COLORS Kannada presents SHANI. Based on the Lord Shani – one who is considered as the equalizer from amongst all deities, the show encapsulates the blessings and wrath that he ordains in the form of karmic justice. Starting tonight, Monday October 23, the show will air from Monday to Friday at 8:30pm.

Born to Lord Surya and created by the Trinity of Lords – Brahma, Vishnu and Shiva, the magnus energy ‘SHANI’ could give an unchallenged ruling of justice and stands for righteousness, while himself facing injustice right from birth. The show traces Shani’s life who faced enormous rejection and injustice which lead him to become the messiah of justice striking the delicate balance between the Sura and Asura worlds.

Commenting on the launch of the show, Parameshwar Gundkal – Business Head of COLORS Kannada and COLORS SUPER said “People have always seen Shani as the lord who decrees bad events in life, but as per mythology he is the lord of justice and righteousness. Foraying into Edutainment through a show like Shani, COLORS Kannada adds to its bouquet of riveting shows, a tale that stands-out from the unvarying line-up of fiction shows on Kannada television. Taking forward the channel’s vision to provide meaningful content, the show differentiates itself through a thoroughly researched mythological topic and a compelling storyline, making for a complete family viewing experience.”

Elated on the latest addition to the line-up, Haaris – Fiction Head, COLORS Kannada said, “SHANI protrudes in terms of scale and depiction compared to any mythology show on Kannada television. After the success and acceptance of the Hindi show – ‘Karmphal Data – Shani’, we realized the need to narrate the story for our Kannada television audience. Clarifying misconceptions and imparting knowledge, the show aims at becoming an iconic representation of the mystical and often misunderstood Lord Shani. Taking the scale a few notches higher, the production and VFX on the show will make for aeuphoric viewing experience for the complete family.”

Produced by the makers of shows like Mahabharata and Mahakali – Swastik Productions, comes an epic tale of Lord Shani in a way never-seen-before.

Tune-in as the balance between right and wrong meets its match in pure karma, on SHANI, starting Tonight October 23, 2017, Monday to Friday at 8:30 PM on COLORS Kannada.

Sony MAX premiere of Baahubali 2: The Conclusion is the highest rated film of 2017
MediaInfoline Oct 24