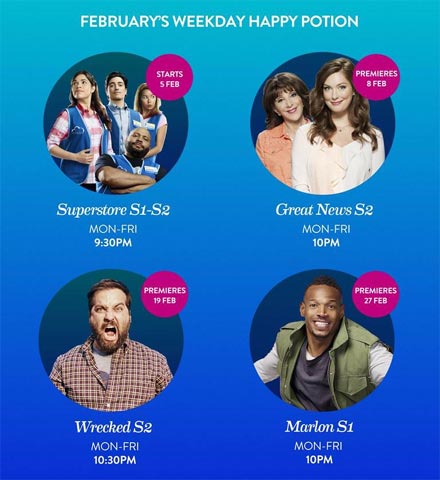 The shortest month of the year is nearly upon us and with February comes a slew of the funniest sitcoms on Comedy Central. We bring to you this month, a mix of Indian television premieres and iconic favorites that you just can’t miss. Catch the Valentine’s Day Special with an entire fourth season of ‘Younger,’ where Liza Miller juggles her feelings for one hunk after another, 10 AM onwards.

Seasons one and two of the sitcom Superstore will air from Monday to Friday at 9.30 pm. Fans will also get to enjoy Great News (Season 2) and Wrecked, a parody of “Lost,” at 10 PM and 10.30 PM respectively. Comedy Central rounds off the fabulous month with the Indian Television Premiere of Marlon, a delightful classic modern-day family comedy, 27th February onwards, Monday to Friday 10 pm.

With so much happening and such an interesting line up of shows, February is all set to become one of the most happening and happiest months of the year.

The All New Line-Up Includes:

Superstore, starring America Ferrera and Ben Feldman, looks at the lives of employees working at a fictional big-box store called “Cloud 9” set in Missouri, USA. Created by Justin Spitzer, the writer of ‘The Office’ and ‘Scrubs’, the show has already been renewed for a third season!

The series, set in the world of television news, follows an up-and-coming news producer who finds herself dealing with a new intern: her mother. The show was created and written by Emmy Award winner Tracey Wigfield and co-executive produced by Tina Fey.

A parody of “Lost”, the show follows the strange antics of a diverse group of survivors after a plane crash on a remote island. The show has been renewed for a third season!

Despite their inability to coexist, divorced couple Marlon Wayne and his ex-wife Ashley try to stay friends for the sake of their two children, Marley and Zack. For this loving (but immature) father, family always does come first – even if he’s the biggest kid of all. The premise of the show is loosely based on Wayans’ own life. The show has been renewed for a second season!

Catch these fun and engaging series throughout the month of February only on Comedy Central – Your #HappyPlace!