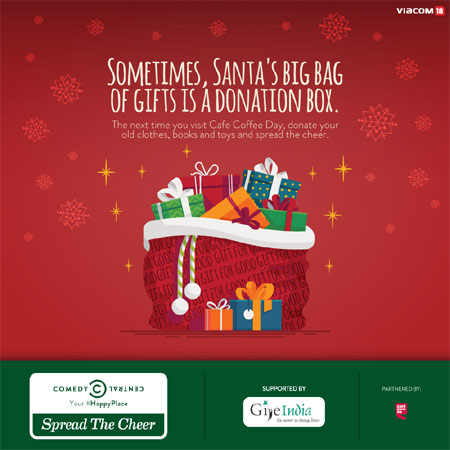 As Christmas is right around the corner and the season’s celebrations are in full swing, Comedy Central- Your #HappyPlace is set to bring abundant joy with the 3rd edition of its iconic happiness campaign Spread The Cheer. Encouraging the spirit of giving, the brand partners with Mad Over Donuts and Café Coffee Day to create India’s Largest Secret Santa Initiative.

To celebrate one of the most loved and exciting Christmas traditions, India’s Largest Secret Santa Initiative, in partnership with Give India, was launched via a microsite on December 20. The initiative encourages consumers to become the Santa themselves, through making meaningful donations this Christmas. Comedy Central also partners with NGO Bhumi and Mad Over Donut to fund meals for over 1000 underprivileged children. Taking the spirit of gifting a notch higher, Comedy Central sets up donation boxes between December 22-28 at Café Coffee Day branches. The brand encourages visitors of Café Coffee Day to donate their old books, clothes and toys in these boxes.