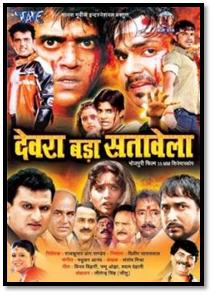 SABGROUP’s Bhojpuri channel – Dabangg is set to entertain the audience with the broadcast of the Bhojpuri Blockbuster ‘Devra Bada Satawela’ a movie featuring for the first time on the small screen. The telecast is scheduled on 20th August at 1pm & repeat at 8pm, featuring the star-studded cast of Ravi Kishan, Pawan Singh, Pradeep Pandey and Rani Chatterjee.

‘Devra Bada Satawela’ has a unique old-school plot which is guaranteed to take movie enthusiasts on a romance-action-comedy adventure. The bond between 2 brothers played by Ravi Kishan and Pawan Singh is questioned when both find themselves in pursuit of a common love-interest. When the woman in question marries one of the brothers, their relationship takes an unusual turn. With this world television premier, Dabangg intends for audiences to relieve Bhojpuri cinema’s best moments with “Devra Bada Satawela”.

Magnifying this World television premier, an extensive marketing campaign has been unfolded in key markets including TV & PR campaigns. With brands like Pidilite – Fevikwik, Godrej GK Fast Card being on board for this special screening as the presenting & associate sponsor respectively.