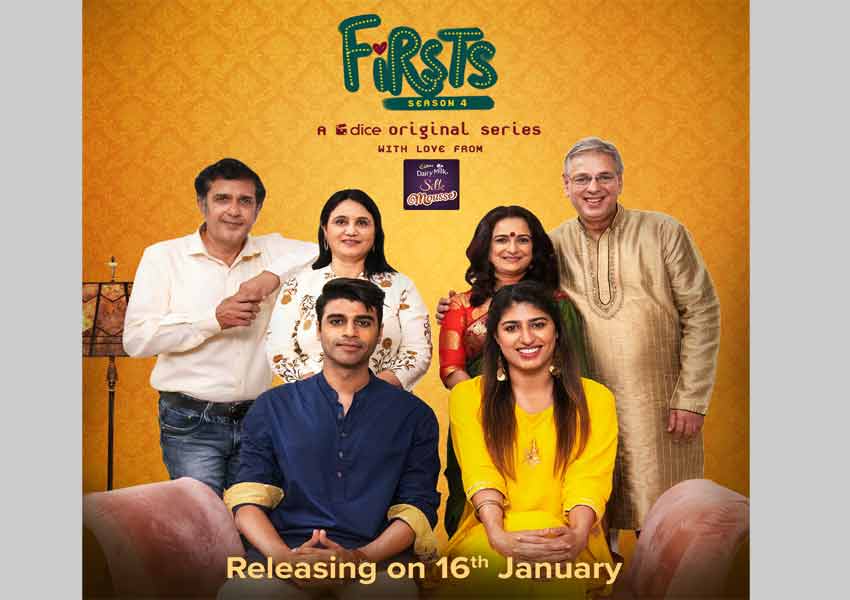 Your favourite Dice Media series Firsts is back with a bang as the popular OTT platform has just launched 2 new seasons.

Season 4 and 5 of Firsts are on their way.

Talking about the association, Karthik Nagarajan, Chief Content Officer, Wavemaker India said, “‘Firsts’ has created a niche for itself in bite-size stories on social media. We are extremely glad to have partnered with Pocket Aces and Dice Media for Cadbury Silk since the initial season of ‘Firsts’. Through ‘Firsts’, Pocket Aces has proved that the art of storytelling is no longer restricted only to large formats. It’s all about getting your message delivered to the right audience through the right platform within a span of a few seconds. The relationship which started a year ago has proven to be quite impactful and we hope it gets better with every season.”

While the previous seasons of Firsts received a remarkable response, Season Four has raised the bar for quality, bite-sized content viewership. Season 4 was launched on 16th January and Season Five on 7th February on Dice Media’s Instagram & Youtube page.

Bringing Back on Popular Demand

The last three seasons have kept the viewers hooked to its heartwarming stories on school romance, virtual relationship during the lockdown, and same gender relationship. Taking the mantle ahead, Dice Media offers two unique narratives in each of its new seasons weaving Cadbury Silk’s two variants – Cadbury Silk Mousse, and Cadbury Silk Heart Pop in its storyline. The integration has been enabled by Wavemaker India.

Firsts Season 4 explores the concept of ‘Arranged Marriage’ through the lives of Kabir & Janhavi. Starring Rohan Khurana and Shreya Mehta, the series captures the unbounded involvement of parents in this relationship and the unspoken adjustments that the protagonists need to make. While the protagonists are not entirely kicked by the idea of an arranged marriage, out of respect for their parents’ decisions they decide to take the plunge and eventually fall in love. Cadbury Silk Mousse, which was launched with this show finds the ideal integration into the story as a fundamental part of the wonderful ‘first’ moments shared by the couple, which are incomplete without the desert.

Starring Akashdeep Arora and Simran Natekar, Season 5 on the other hand, delves into a soft budding love story between Ayaan, a 2nd year college student in a wheelchair, and Avni, a college fresher.

The Catalyst of Love

In both seasons, Cadbury Silk acts as a catalyst for emoting love. Being a brand whose communication has always been centered around special moments, and feelings, the raw emotions of love depicted in the narrative of Firsts resonated perfectly with Cadbury Silk resulting in a seamless integration into the series.

Speaking about the association, Vishwanath Shetty, VP, Sales, Pocket Aces, said “Firsts has always been a series about cherishing magical moments that you only get to experience once in your life. It has also broken ground for its bite- sized storytelling format since the beginning, leading to a phenomenal success. In a market vying for the viewer’s attention, Firsts stands out for being able to capture their attention span, and communicate our story and brand message within a minute. Cadbury Silk has been our partner for four seasons now and we feel extremely thrilled to have them on board with us. The journey of our association has been a phenomenal success for us, that has been built with trust over the course of the year. Being a brand whose messaging centers around emotions, which plays out throughout the show, and hence was an ideal fit, to showcase different facets of modern-day love stories. As we continue on our mission of solving boredom and keeping our audiences entertained, we are hopeful of building lasting relationships with brands to connect with their target audiences.”