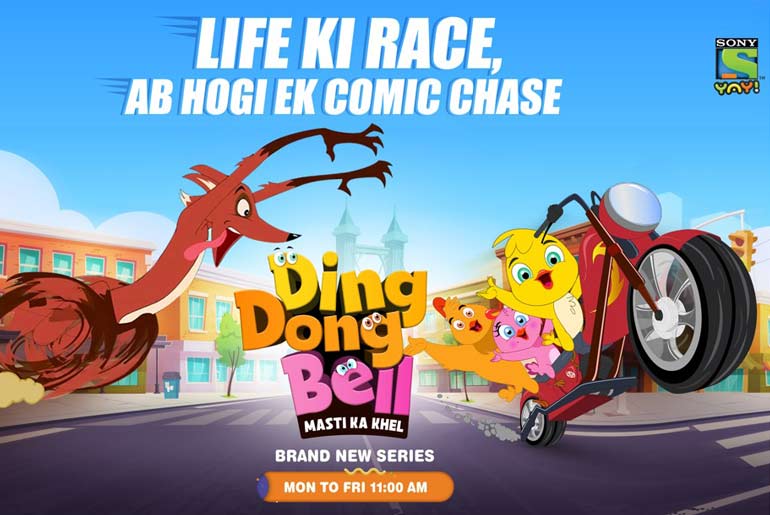 The show will bring three chicks who constantly create funny plot twists to try to outrun and escape a hungry fox. These rib-tickling adventures between the characters will be further turned into a laughter riot by Jaaved Jaaferi and Mubeen Saudagar, maestros of voice-over art.

In every episode of Ding Dong Bell, Masti Ka Khel, kids’ beloved characters AKA the Kukkads – Ding, Dong, and Bell are chased by Bhukkad, a hungry fox. The perennially hungry fox is always on the prowl for these chicks who are always at the ready to foil his plan. Each chick is equipped with a special talent of Brains, Beauty, and Brawn.  And, these chicks are in the race to outsmart the fox and hence creating a laughter riot for kids. Every failure angers the determined fox to devise even more elaborate plans to outwit them in each passing episode, which usually ends up being a wild chick chase.

Leena Lele Dutta, Business Head, Sony Pictures Networks India, Kids’ Genre commented on the new show, “Ding Dong Bell, Masti Ka Khel is our pre-festive treat to kids which is packed with a hilarious ride doubled with funny commentaries by the best artists of the industry. While we have a barrage of new content lined up for the upcoming festive season, this is to give our young audience a taste of what they can expect in the coming months and continue serving them all their favorite characters & narratives.”

Jaaved Jaaferi, Voice-over Artist commented, “I have always loved working with kids’ content and with a show like Ding Dong Bell, it has been a laugh riot while shaping up the narrative around it. The show is a perfect mix of comedy and adventure, and I cannot wait for the kids to see how we have reimagined the adventures of Ding Dong Bell, Masti Ka Khel.”