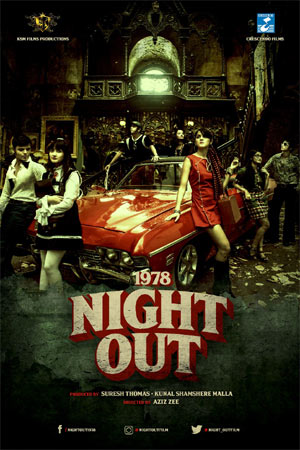 Basking on the success of his last films, Aziz Zee gears up to spell his brilliance in his next directorial “1978 Night Out” – A film about a bunch of teenagers who plan a night out  and things go wrong.
Asked about the unusual title, Aziz Zee said “I kept this title because I wasn’t getting a title for a suspense thriller as numerous films have come up. This title builts a sense of inquisitiveness among st the audience . The whole film is a suspense thriller. We thought of numerous titles but it didn’t sound strong enough.”
Drawing inspiration from Hollywood, Aziz Zee calls them immensely popular because of their brilliant plot, direction & casting “Hollywood has dominated the thriller genre for years with several masterpieces. However Bollywood has mastered romantic genre but we are still a progressive industry when it comes to suspense thriller. I am sure in coming years directors of Bollywood will dominate world cinema in every genre.”
How would you define a passion that comes like a one-way track to success? An amalgamation of perfect timing and hard work maybe. With an astute creative acumen and clear perspective,  Director Aziz Zee has played his cards right.
Film – ‘1978 NIGHT OUT ‘, Produced by – Crescendo Films / KSM Films; Producers – Suresh Thomas / Kunal Malla; Director – Aziz Zee; D.O.P – Mohd. Jaffer; Music – Santosh Nair, Kunal Malla, Nimit Vaishnav.
Tags:
Previous Article
Designer Rohit Verma Announced His Next Collection Titled “Maha Kumbh Collection”
Next Article
Makani Creatives wins creative duties for Panasonic Smartphones