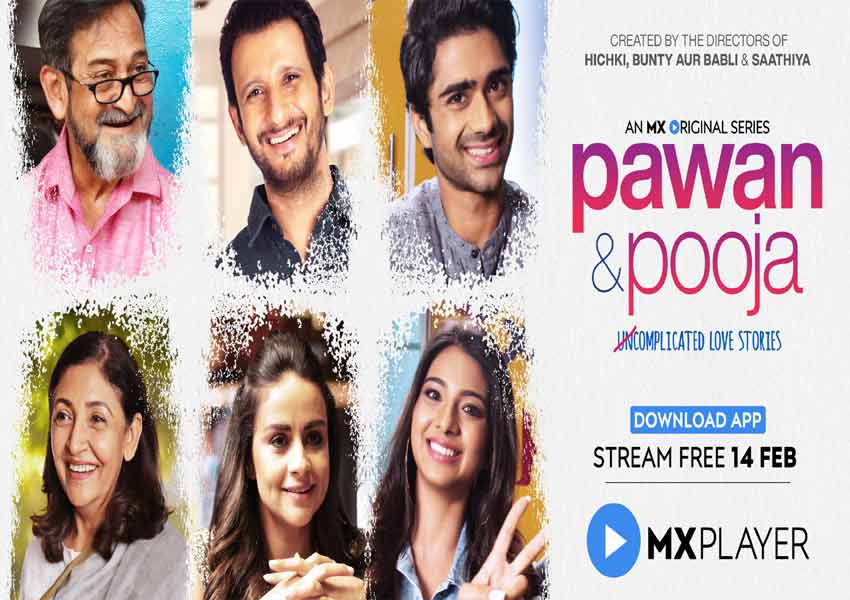 MX Player has joined hands with some of the best in the industry to curate its slate of Originals and Exclusives. This time, the leading streaming platform is associating with not one but three prominent Bollywood creative minds for its upcoming MX Original Series – Pawan & Pooja!

Siddharth P Malhotra, who is acclaimed for his films – We Are Family and Hichki, Shaad Ali who won hearts with Saathiya, Bunty aur Babli, OK Jaanu and Director Ajay Bhuyanare helming this project. The relationship drama explores the lives of 3 couples – all coincidently named Pawan and Pooja who at different stages of their lives discover that their love is indeed conditional, breakable and questionable.An ensemble cast is seen essaying the roles of Pawan and Pooja with veteran actors Mahesh Manjrekar – Deepti Naval, powerhouse performers Sharman Joshi -Gul Panag and young heartthrobs Taaruk Raina – Natasha Bharadwaj as the 3 couples.

Director, writer, executive producer and a screenplay and dialogue writer, Siddharth P Malhotra has a lot to his credit. Right from films like We Are Family to Hichki, he has showcased love, relationships, and changes in ideologies in ways that are complex yet relatable. Having conceptualized and created this series, he said, “The show is about love and relationships and what they mean to three different generations. All three stories have been drawn from real life experiences of people and questions the concept of love and it says that love not idealistic, let’s be realistic.Life is not black and white anymore, it’s grey. The show basically deals the grey shades of life.”

Along with Siddharth P Malhotra, Shaad Ali has also created the show. Having given blockbuster successes likeSaathiya and OK Jaanu, he has a unique take on new age love stories that seems to be his forte. He is also the director of the series ‘Pawan and Pooja’. Speaking about the series, he said,“The stories and the situations are so real, they stories could be anybody’s. It’s a story about couples and love, but it will show you a very different aspect of it. Every single character is superbly etched out, and each of the actors have just taken it to another level, it’s their show, really.”

The series is all set to release on 14th February 2020 on MX Player for FREE.

Now ‘No Drama, Only Khaana’ at restaurants with Dineout
MediaInfoline Feb 04