Disney Channel to start 2016 with a bang 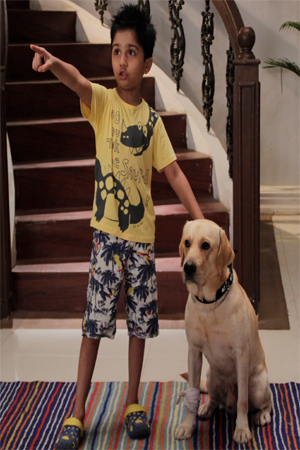 When you ask anyone which is their favourite pet, the answer mostly is dog. Yes, everyone loves dogs and so does young and mischievous Mihir Khanna. But not everyone is as lucky as Mihir. Not only did he find himself a cute 2 year old puppy, but a walking talking Haryanvi puppy. Yes, Mihir Khanna’s ordinary life takes an extraordinary spin as he brings home Gabbar, his Haryanvi talking 2 year old puppy, on Gabbar Poonchwala,  the latest offering on Disney Channel.

Young Mihir finds a lost Gabbar wandering on the streets and takes him home even though he knows his mother will not be happy about it. In a drastic turn of events, Gabbar is able to verbally communicate with Mihir in Haryanvi! Considering that Gabbar has been brought into a house which has never had pets before, understandably, it wreaks havoc in the Khanna household. But with Gabbar’s soulful brown eyes, he very gently and cheekily steals the hearts of the entire Khanna family.

Speaking about his role as Mihir Khanna, child artist Nihaar Gite says, “I love dogs and was very excited when I got to know that I will be working with one day in and day out. Gabbar is not only my best friend on the show but in real life too. We have a lot of fun on the sets as all of us play with him in our free time. I just wish that in real life also Gabbar could speak to me. I love him a lot”

The exciting adventures of Gabbar and Mihir along with stories of the friendship will surely ensure a great start to the new year.

Catch the unique and exhilarating journey of Mihir and Gabbar on Gabbar Poonchwala, starting Monday 11 January 2016, 7:00pm only on Disney Channel