Double tashan and double fun with Season 2 of Little Singham 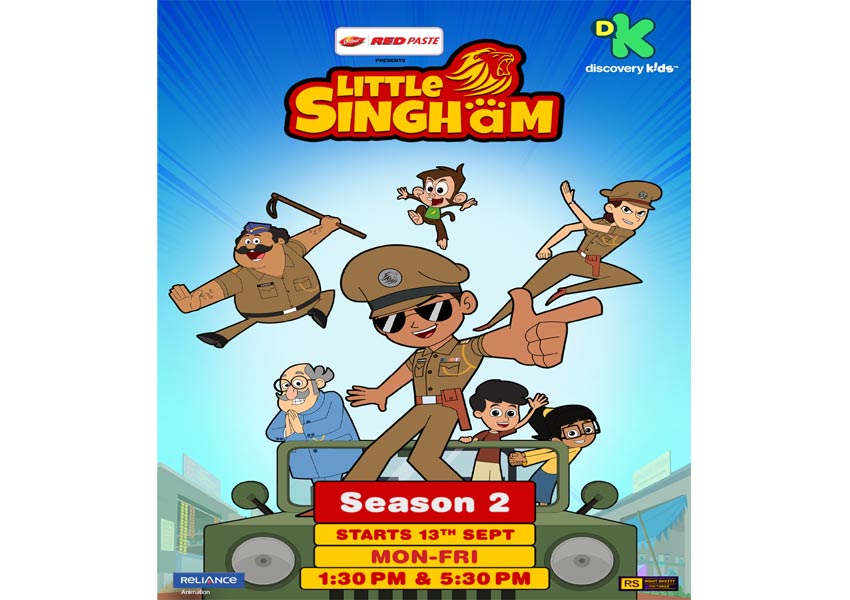 Discovery Kids is geared to launch the season 2 of Little Singham on the auspicious occasion of Ganesh Chaturthi. Reliance Animation & Rohit Shetty Picturez’s Little Singham, launched in collaboration with Discovery Kids, has become one of the favorite characters in a very short span of time. Starting September 13, season 2 of Little Singham will introduce crazy new villains, new adventures & locations topped up with festive themes like Ganpati, Navratri, Dussehra and Diwali promising great entertainment, superb action and laughter moments under the theme double tashan and double fun!

Little Singham animation series, inspired by ‘Singham’, one of Bollywood’s biggest blockbusters and mentored by ace director Rohit Shetty, is creating history across dimensions. The IP has helped in propelling ratings of Discovery Kids by more than 400% this year. ‘Little Singham’ Mobile Game added to the IP’s success hitting the top of the charts in the Arcade section by garnering 3 million downloads within the first two weeks of its launch.

Uttam Pal Singh, Business Head, Discovery Kids, said, “Little Singham’s swag, action and humor, has won the hearts of Indian Kids and they have been demanding for more since the launch. Season 2, scheduled to be launched on the auspicious occasion of Ganesh Chaturthi, with the theme of ‘Double Tashan-Double Fun’ promises the kids more entertainment, more action, crazy new villains and great laughter moments with their favorite character – Little Singham.”

“Little Singham’s success has further reinforced my conviction about the strength of Singham franchise. I knew that Little Singham would be a runaway success even before the IP was officially launched earlier this year – but the scale of it has made me numb. My gratitude to the audiences who continue to shower their blessings on brand Singham. Little Singham has in a way expanded the loyal following of Singham brand even further by getting the youngest of the audiences to its fold. The second season of Little Singham will take the fun quotient even higher – get ready for it! We will bowl you over,” said, Ace Director, Producer & Mentor of Little Singham, Rohit Shetty. “The Singham franchise is a tribute to the selfless contribution of police forces to our society. The youngest super-cop Little Singham provides an inspiration to the children to fight against the evil.”

Catch second season of the favorite show Little Singham only on Discovery Kids at 1:30 and 5:30 PM from 13th September.