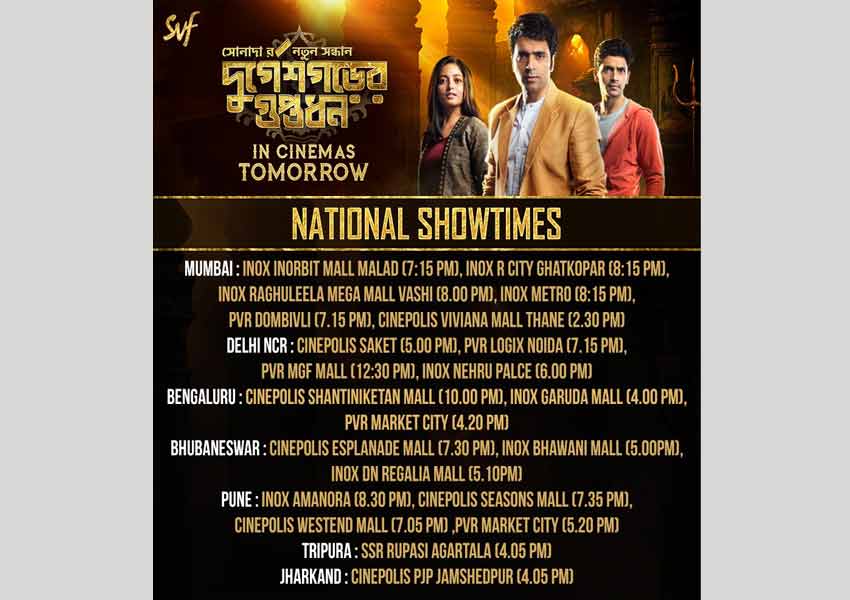 Last year (2018) the first part of the franchise, Guptodhoner Sondhane, struck gold at the Box Office with the adventure seeking Bengali audience making a bee-line to the theatres. The imminent success of the film and popularity of ‘Sona Da’ (Abir Chatterjee) prompted the makers and director to come up with the second part of the treasure hunt series, Durgeshgorer Guptodhon within a year. This summer Bengali’s favourite boy Sona Da aka, Professor of history Subarna Sen, along with Abir ( Arjun Chakraborty) & Jhinuk (Ishaa Saha) decide to visit one of Sona da’s student’s ancestral mansion at Durgeshgor. The great grandfather of this student was an erstwhile zamindar and a renowned artist of Bengal. There is a myth that runs in the family that they had once received a massive treasure, but all traces and trails of it had been lost. Sona’da along with Abir and Jhinuk join a festivity in that mansion in Durgeshgor and stumble upon the lost clues that may lead them in unearthing one of the greatest treasures of Bengal!

Excited about the national release of his film, lead actor Abir Chatterjee goes on to say: “It was heartening to see my character ‘Sona Da’ receiving a lot of praise and acceptance from the Bengali diaspora across the country. After receiving a lot of requests to a sequel, I’m glad that we are back with the second part of the series, Durgeshgorer Guptodhon and this time the adventure and thrill will be double!”