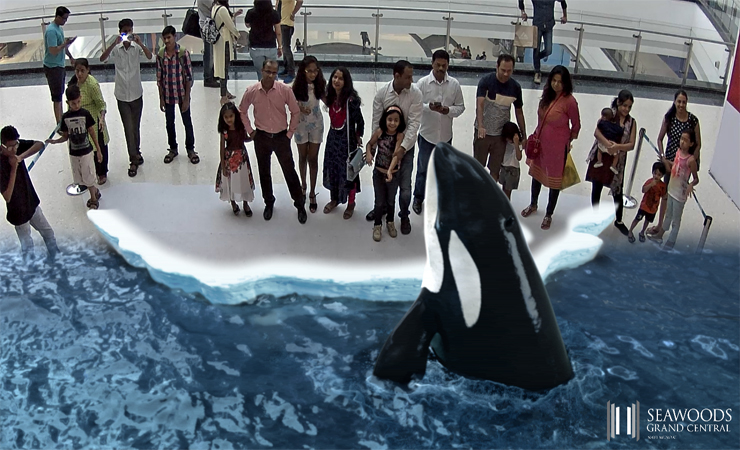 Seawoods Grand Central (SGC) Mall opened its doors to Navi Mumbaikars on March 23, 2017. Since then, the action has continued at the Ultimate Fashion Destination of Navi Mumbai. Keeping up with their promise of delivering an unparalleled experience to its patrons in Navi Mumbai, SGC Mall has brought to life the polar bear, whales, penguins and orcas from the Arctic through an augmented reality show. This unique state-of-the-art augmented reality show will continue until May 7, 2017 on the second floor of the mall.

Augmented reality (AR) is a technology that gives a real-life experience through computerized graphics, sounds and images. The viewer feels part of the virtual world displayed on screen and yet the distinction between the real and virtual is obvious.

The display, introduced at SGC Mall early this month, gives a spectacular experience of Orca whales emerging out of glacier waters of the Arctic Ocean. There is a white polar bear coming out of the water and growling. The penguins come in flocks and dance around endearingly. This is a sight to behold for both kids and adults alike.

SGC Mall is also India’s largest Transit Oriented Development (TOD). TOD’s are a crossroad of enterprise and entertainment, culture and commerce; where offices, malls, restaurants and recreational spots converge around a transit station or stop. Such developments are hailed globally for their ecological benefits. Besides being directly connected to the Seawoods railway station, the mall is 5 minutes from Belapur CBD, easily accessible from 8 lane Sion Panvel express highway and closer to proposed Navi Mumbai Metro corridor. SGC mall is part of the Nexus Malls portfolio, while the TOD complex is being developed by L&T.

Owned by Nexus Malls, the asset is destined to be epicenter of the city the retail mix it has to offer, entertainment avenues, multiplex and F&B options Anchor stores like Big Bazaar and Lifestyle greet the commuters at the exit of Seawoods Railway station, thus bringing in a whole new consumer experience of convenience fashioned with grandeur. The 4 storied ( Ground + 2 with a Lower Ground floor)  mall will house 160 retail stores with over 15 restaurants and a food court to sit 1200 people at once. The mall boasts of a three level basement car parking to accommodate 2800 vehicles, largest amongst all malls in Mumbai metropolitan region.

SGC Mall aims at transforming Navi Mumbai landscape through fashion, food, entertainment and technology to make it fit for a Smart City. The mall began its journey with an unprecedented musical show at Navi Mumbai through a live concert with Papon & Jonita Gandhi. A first for Jonita, the Papon & Jonita performance saw thousands of music lovers swaying to their tunes, mesmerized by their voice. The mall is looking at introducing various innovative concepts & engagement ideas to ensure Navi Mumbaikars do not need to travel for miles to meet their needs – Both shopping and entertainment.