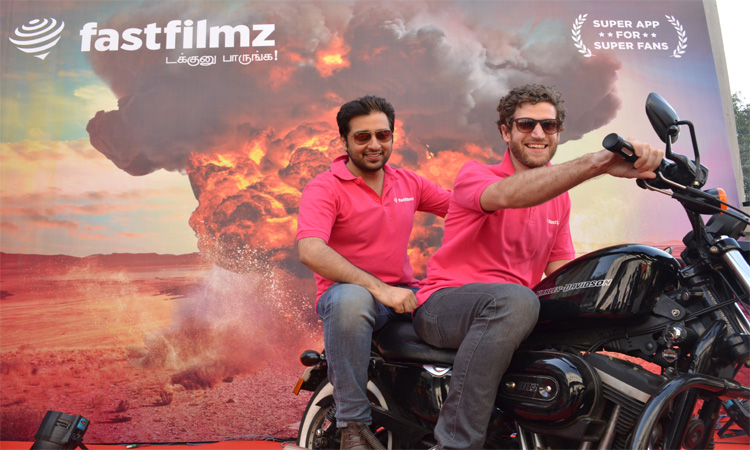 fastfilmz is co-founded by Harvard and Kellogg alumni and previous employees of McKinsey & Company – Dominic Charles and Karam Malhotra – co-CEOs and co-Founders, fastfilmz. The company has been funded by multiple angel investors from the USA and Europe.

The fastfilmz app is designed for the common man and woman in India who lovetheir regional cinema but cannot afford high data charges, an expensive smartphone or even movie tickets on a regular basis. On the other hand, the subscription cost for this app starts at only Rs. 10 per week and Rs. 30 per month.The payment model has been simplified by the company to appeal to the end-consumer, where the amount will be deducted from talk-time balance. At launch, fastfilmz has tied up with the four largest network service providers in TN (Aircel, Airtel, Vodafone, Idea).

fastfilmz has exclusively partnered with V-Nova for its PERSEUS™ Technology – the world’s fastest video compression technology – to solve the issues of high data costs for downloads and buffering when streaming. V-Nova’s PERSEUSTMallows fastfilmz to provide full movie downloads at as low as 150MB data per 2.5-hours movie versus >600MB data usage by any other app. V-Nova Limited is a London-headquartered software company providing advanced video compression technology and software solutions. The technology also enables streaming ofquality video over the 2G networks that 70% of India’s consumers use for Internet access.

“We noticed that small-town, regional consumers didn’t have access to fast networks and affordable data to watch movies on their smartphones at ease. We decided to create fastfilmz to bridge this gap. By partnering with V-Nova exclusively, we have rights to use their world-class video compression technology PERSEUS™, which enables us to provide HD quality movies to our users at affordable data costs. Moreover, the technology has helped usincrease our potential customer base by 4x, from a possible 30 million customers using 3G to over 120 million customers using 2G and 3G”, says co-CEO and Co-Founder, Karam Malhotra.

“While conducting our market study, we saw that the consumption of regional cinema in India is as large as Bollywood, but not one single service dedicated to this devoted audience. We are launching with the best catalogue of recent and classic Tamil movies featuring all the top Heroes and we will be adding 5-10 more titles each and every week. Meanwhile, we will also be adding some of the best Telugu movies to the app by the end of this year.” says co-CEO and co-founder, Dominic Charles.

The fastfilmz app is live on the Google Play – https://play.google.com/store/apps/details?id=com.fastfilmz.android

Tags:
Previous Article
1BHK for Rs 5 Lakh- Pune’s Maple Group, the 1st company to respond to clarion call of ‘Housing For All’
Next Article
GROHE among Germany’s most innovative companies