Feel The Other Side of Cinema with &Privé HD 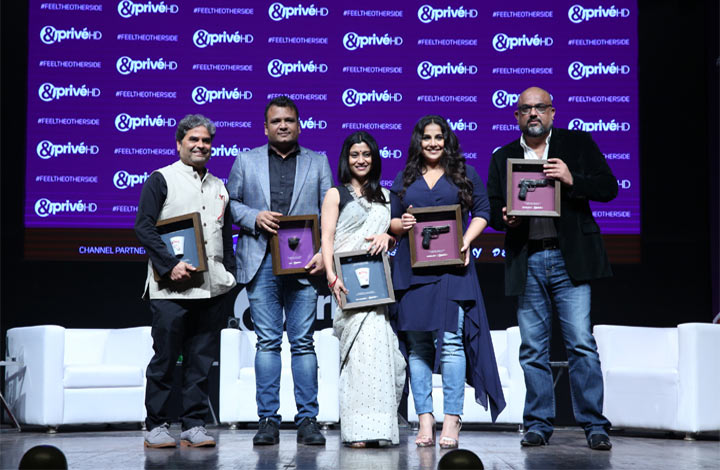 Discerning cinema lovers are in for a treat as Zee Entertainment Enterprises Ltd. (ZEEL) announced the launch of its premium English movie channel – &Privé HD. The channel is specially designed for those who venture into the depths of cinema, who crave for the alternate… who feel the other side! &Privé will go LIVE across major DTH HD platforms on September 24th at 1 PM with the premiere of 2017’s Oscar winning movie, Moonlight.

With an aim to drive conversations around fine cinema and its nuances, &Privé held a grand launch at Royal Opera House, Mumbai which saw some of India’s most celebrated non-conformist film personalities –  actors Vidya Balan and Konkona Sen Sharma along with film-maker Vishal Bhardwaj and producer Manish Mundra come together to celebrate ‘The Other Side’ of cinema. Moderated by Samar Khan, the panel discussion witnessed these artists share their cinematic journey as they revealed the movies and artists who had a deep impact on their craft. It also brought to the fore an interesting perspective on movies like Moonlight, Jackie and Pele, amongst others, as how they have showcased multiple layers of emotions compelling cinema lovers to unravel each layer and feel the soul of the movies.

Derived from the French word Privé which means a personal or private place, &Privé promises to become your personal favourite destination for fine cinema. The channel will showcase premieres of award winning films such as Jackie, Arrival, Lion, The Founder and Pele to name a few. The channel will celebrate fine cinema with two properties, ‘True Side’ and ‘100 Sides at 9’. ‘100 Sides at 9’ will present viewers with 100 days of unmissable cinema, highlighting the 100 different sides of films at 9 pm every day. The ‘True Side’ property will bring to life the captivating real-life stories and biographies of some of the most inspiring individuals every Saturday at 11:00 PM. &Privé HD will be premiering 40 critically acclaimed films and have 350 celebrated titles in their line-up.

Speaking about the launch, Punit Misra, CEO – Domestic Broadcast, ZEEL, said, “For audiences who have a mind of their own, who chart their own path and take the road less travelled, we are proud to present &Privé HD. It’s a premium destination especially created for these non-conformists who aren’t happy with just scratching the surface of movies, but love to dive deeper into their souls those who go beyond the obvious and feel the other side. The brilliantly curated library boasts of movies with multiple layers that will stay with you. We are confident that &Privé will find a place in the hearts of our free-thinking discerning viewers.”

Powerhouse performer Vidya Balan shared, “There were two things which appealed greatly to me when I heard about &Prive- First, the concept and ideology on which the channel was based and second being, the challenge they were addressing by targeting the mindset of the audience. Movies like Moonlight, which is a personal favourite, pushes viewers to be more accepting of people’s upbringing and sexual preferences. These movies will make you ‘feel the other side’ of the characters themselves and that’s what I think &Prive HD is all about.”

The talented Konkona Sen Sharma said, “It’s high time that a channel like this was created! As an actor, I feel our job is to not just entertain but to push the boundaries of emotion to a deeper level. Films like Moonlight and Lion do that, they open doors to new possibilities, new cinema. I applaud Zee for creating this much-needed space.”

Film-maker Vishal Bhardwaj shared, “I think it is a great initiative by Zee to launch a channel like this. &Privé has a fantastic line up of titles, some of them being my personal favourites! With the experience that I have in film making, I can assure that the movies which will be showcased are not just films, they are works of art. They cater both to your rational and emotional side and will truly make you ‘feel the other side’ of cinema. It’s something I personally try to do through my movies and I am glad the Indian audiences are getting a chance to experience this at their homes now, thanks to &Privé.”

With channel partners Fiama and Vaseline, &Privé HD will ensure that Indian viewers are treated to the fine cinema through collaborations with two of the biggest studios in Hollywood – Sony Pictures and Paramount.

So, get set to indulge the non-conformist in you with riveting cinema and an unforgettable experience with &Privé HD starting 24th September at 1:00 PM.