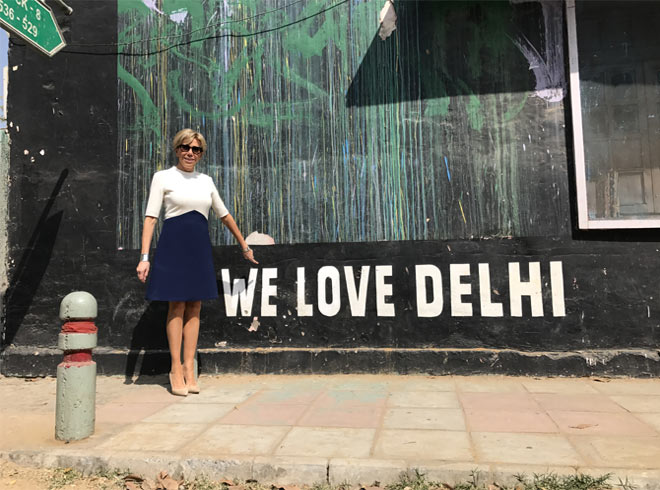 The Lodhi Colony area of Delhi which was transformed into India’s very first open public art district as part of the St+art Festival in 2015. The two month long festival had brought together over 25 street artists from India and across the world to brighten the city with art interventions like murals, installations and more. The popular art district is visited by many dignitaries throughout the year. One such luminary to grace the Lodhi Art District yesterday was The First Lady of France, Mrs Brigitte Macron.

St+art Sr. Architect, Mr. Pierre Guyot, who conducted the special tour for the First Lady walked for an hour and a half across the Art District, says she was particularly interested by some very powerful work, as the birds by Daleast or original aboriginal by Reko Rennie. Mrs Macron was also very impressed in the diversity of techniques used by artists that shows that street art is a very lively artistic trend that goes beyond graffiti.  Furthermore, she was particularly impressed by the creation of an open air art museum that offers art to all in the most relatable and engaging manner.

Pointing out also how the spirit of cultural exchange and collaboration that many pieces (for example “We Love Delhi”, collaboration between the French duo Lek & Sowat and the Indian artist Hanif Kureshi) brings in Lodhi, is felt in every corner, giving an inspiring vibe of an environment which is both local and global.

The visit also highlights the successful and prolific collaboration between St+art India Foundation and the French institutions in India (Embassy of France, Institute Francaise, Alliance Francaise), which recently culminated in 4 projects across Mumbai, Hyderabad, Calcutta and Chandigarh on the occasion of the Bonjour India project. A project started in 2015 by St+art India Foundation and made possible thanks to the collaborative efforts and unconditioned support of Asian Paints, the Minister of Urban Development, CPWD, DUAC and more than 20 Embassies and Institutes of Culture.

Lodhi Art district is now on the tourist maps, being recognised as one of the premiere attractions in Delhi. It had also recently been visited by the family of the Canadian Prime Minister, Justin Trudeau, and recognised by the Union Minister of Start with independent charge in the Ministry of Housing & Urban Affairs Shri Hardeep S Puri as example of new heritage for the Indian cultural landscape. The Minister along with DUAC took Lodhi Art District as case of study also within the Master Plans for Smart cities in India.

With the project, St+art and Bonjour India, in association with Alliance Française and with the support of Asian Paints, aimed to present a unique experience for the city and its residents – activate a direct engagement and communication with the viewer through a holistic combination of content and forms using the power of words to reinvent spaces.

Mr. Amit Syngle, COO, Asian Paints Ltd. said, “With the Lodhi Art District, we hoped to add a bit of vibrancy to the city and uplift the moods, spirits and lives of the people. We wanted to take art to the masses and make it accessible to a wider range of spectators. The idea was to open spaces to dialogues, conversations and culture creation through the lens of the city”.

Arjun Bahl – co-founder and director St+art India Foundation says, “It was a great honour for the organisation to receive the first lady of France at the Lodhi Art District for a special curated tour. Mrs Macron’s momentous visit reaffirms St+art’s strong partnership with the French Government in India and we hope to continue this partnership for many years to come”.

Giulia Ambrogi, co-founder and curator of St+art India: “In early 2016 we started Lodhi Art District thanks to the collaborative efforts and unconditioned support of Asian Paints, the Minister of Urban Development, CPWD, DUAC and more than 20 Embassies and Institutes of Culture. The aim was to present a unique experience for the city and its residents – activate a direct engagement and communication with the viewer through a holistic combination of content and forms. We are stocked to see the results of this effort such as the visit of the First Lady of France which, as others as well, confirmed the value of the project as a new area of interest for the capital. We are looking forward to enhance the district with new art experiences soon.”