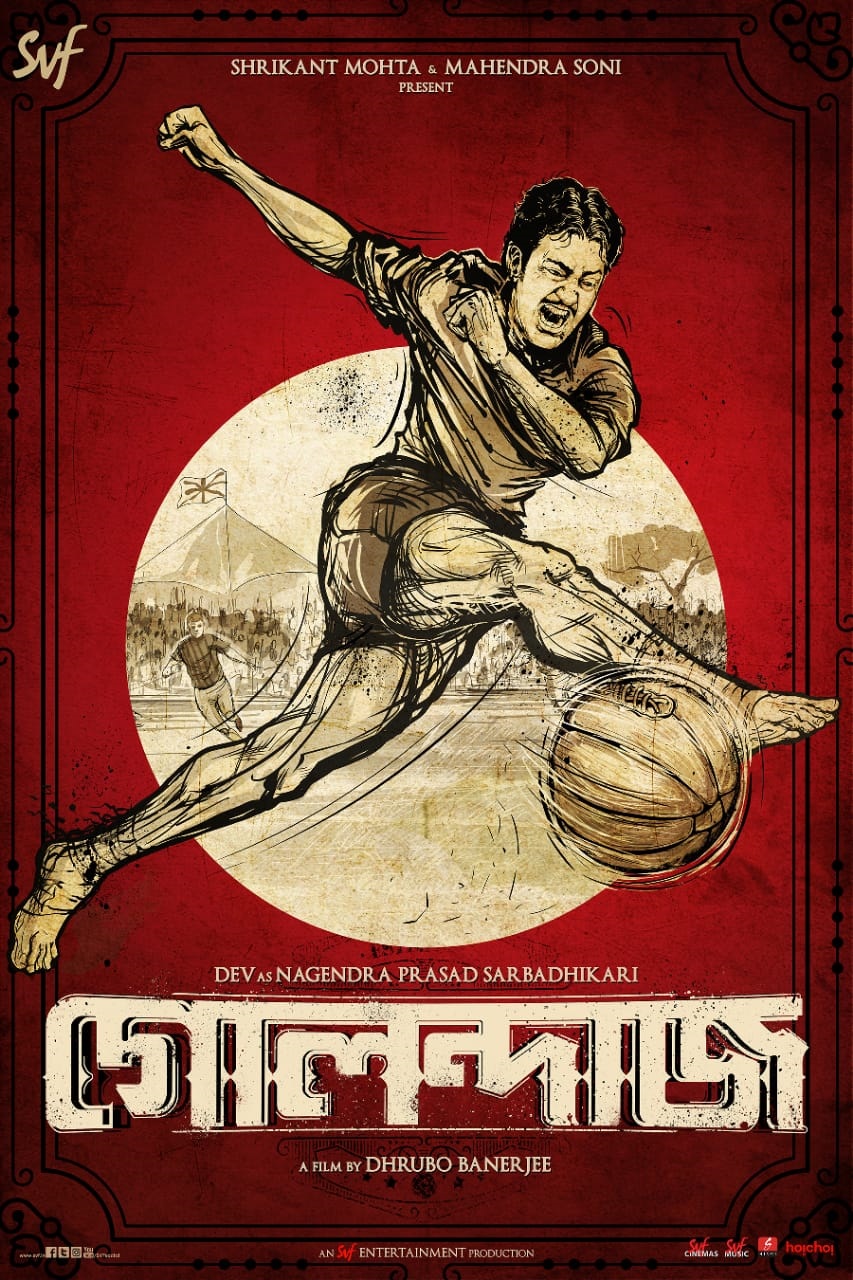 SVF and director Dhrubo Banerjee revealed the first look motion poster of their much-awaited historical drama Golondaaj and also gave a sneak-peek into the characters of the magnum opus historical drama.

The motion poster starts with a group of skilled and well-dressed British players playing in a field adjoining a British flag flying high atop a hillock giving a clear picture of a colonial India. Suddenly emerges a native Indian man, well built with an athletic body who seems to take away the ball from them and block their game, thereby showing that he challenges their status quo. We see the man to be none other than Nagendra Prasad Sarbadhikari (a rough figurine of Dev).

The following characters and actors of Golondaaj have been introduced with a timeline of 1892:

1) Nagendra Prasad Sarbadhikari – Helming the role of the protagonist of the film will be none other than Tollywood superstar, one of the most desirable stars in the industry and nationally acclaimed actor turned MP Dev Adhikari. He will be seen portraying the radical, open minded, prolific athlete who will be responsible for introducing the concept of football among the people of India, with its roots from undivided Bengal. Nagen will be seen as a man who challenges the existing social structure and will go on to become a true leader on the field…the ripples of his action will resonate across the country.

2) Bhargav – will be essayed by popular and seasoned actor Anirban Bhattacharya. Bhargav is this film’s surprise element, a freedom fighter who is responsible for instilling the nationalist angle in the narrative.

3) Kamalini – Popular Bengali actress Ishaa M Saha portrays the character of Kamalini. She is the princess of Sovabazar married to Nagendra and contributes to an amazing romantic side to the film.The otherwise shy, naïve girl, Kamalini , turns out to be one of Nagendra’s greatest support.

4) Jeetendra – Popular Bengali actor Indrashish Ray will dorn the character of Jeetendra, a fearsome, robust character, whose love for his land made him anti British.

7) Prasanna Kumar Sarbadhikari – Director actor Joydeep Mukherjee will be seen playing this character. Prasanna is Surya Kumar’s elder brother, one of the leading educationists of the time who loved Nagendra like his own son.

8)  Naru – Naru is an integral cast in the film, junior to Nagendra and his childhood friend who adds the lighter notes to the narrative. He’s also one of the key emotional quotients to the film. The casting for this character has not yet been locked.

9) Binod – Known face John Bhattacharya will be seen playing the character of Binod. Junior to Nagendra Prasad and his childhood friend a good player, an ardent follower and a feisty character.

10) Nabakumar– Anirban Bhattacharya (who had previously played the role of police inspector in Bidaay Byomkesh, also a dialogue writer in the film) is another key cast to the film. Nabakumar poses a serious challenge to Nagendra towards fulfilling his mission

Golondaaj is based on the life and time of Nagendra Prasad Sarbadhikari and the events that follow. The screenplay and direction of the film has been done by acclaimed director Dhrubo Banerjee whose last film Durgeshgorer Guptodhon was the highest grosser at the Bengali Box Office. The story of the film has been writte by Dulal Dey and director Dhrubo Banerjee. The music for the film will be accomplished by maestro Bickram Ghosh and lyrics by acclaimed lyricist Srijato. The film is scheduled to go on floors soon.

Please watch the motion video of the poster of Golondaaj here.