Flix First Premiere the ‘Jumanji: Welcome to the Jungle’ 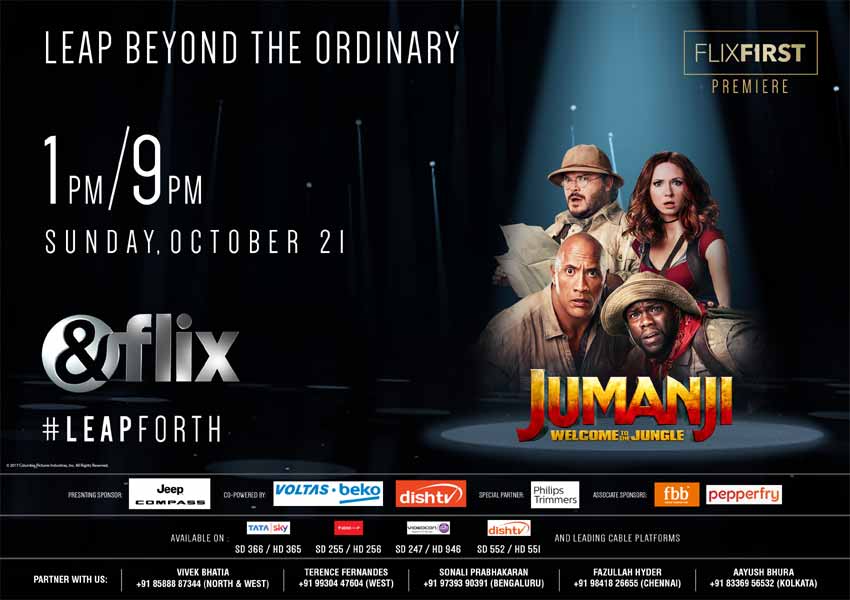 &flix is set to premiere ‘Jumanji: Welcome to the Jungle’ this Sunday, October 21 at 1PM, under the Flix First Premiere. For the first time ever, this movie will be simulcast across the Zee English network, that includes Zee Café, Zee Café HD and &PrivèHD, alongside &flix and &flix HD. Directed by Jake Kasdan, the film stars an ensemble cast featuring superstars like Dwayne “The Rock” Johnson, standup comedians Kevin Hart, Jack Black, along with Karen Gillan.

Jumanji: Welcome To The Jungle is an updated adaptation of Chris Van Allsburg’s picture book, this time turning the life-altering board game into a video game. The movie opens in the past when a teenager invariably gets pulled into the video game. Cut to present day where four high schoolers:  popular girl Bethany (Madison Iseman), stoic Martha (Morgan Turner), nerdy Spencer (Alex Wolff), and football star Fridge (Ser’Darius Blain) are sent to detention to clean the basement.

Fridge and Spencer find the Jumanji game in an old donation box and convince the girls to play. As soon as they start, all of them are thrown into the game world where they turn into the avatars they chose and now have to go through a series of obstacles and have only 3 lives. Spencer is transformed into superhero-sized archeologist Smolder Bravestone (Dwayne “The Rock” Johnson), Fridge is Bravestone’s diminutive sidekick zoologist Moose Finbar (Kevin Hart), Martha is vixen Ruby Roundhouse (Karen Gillan), and Bethany is cartographer Professor Shelly Overton (Jack Black). The movie that was named as the fourth most profitable release of 2017, is sure to take you on a thrilling yet funny journey.

Speaking about one of the biggest premieres of the year, Shaurya Mehta, Head, Premium Channels, ZEEL, said, “Jumanji: Welcome to the Jungle is one of the biggest blockbusters of recent times with great reception around the world. We are proud to premiere this offering to kickstart the festive season, fitting perfectly well with our philosophy of bringing the best and the most awaited films to Indian television. With the simulcast on the three channels, we aim to bring this grand adventure to the cross-section of our audience.”

Get set to beat the jungle at its own game. Watch the Flix First Premiere of JUMANJI: WELCOME TO THE JUNGLE on &flix, this Sunday, October 21 at 1 PM & 9 PM.