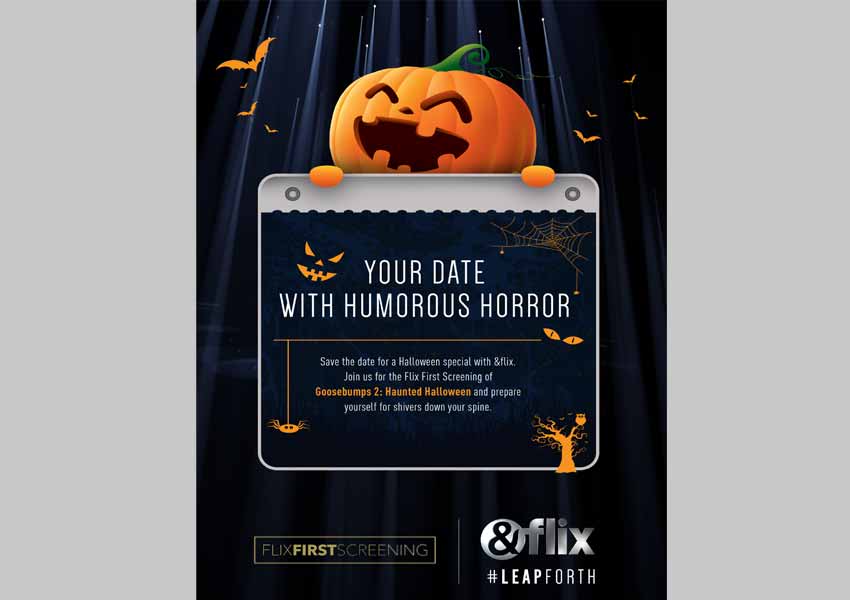 &flix brings the much-anticipated sequel Goosebumps 2: Haunted Halloween on Thursday, October 25, as a part of its exclusive on-ground property FLIX FIRST SCREENING: in theatres across Mumbai, Delhi and Bangalore. The channel is giving its viewers an opportunity to watch the film, before anyone else does, as the movie is releasing in theatres on October 26, 2018.

With Halloween around the corner, Goosebumps series makes for a perfect addition to the celebrations. Inspired by one of the most popular children’s horror story author R.L. Stine, Goosebumps and now its sequel, aims to retain the original spookiness of the story with exceptional visual extravaganza.  As a precursor, Goosebumps released in 2015, will air on &flix on Saturday, October 20, 2018 at 11PM to set the theme of the second edition and revive your terrific memories.

The film follows Slappy, a mischievous talking dummy from an unpublished book ‘Goosebumps’ by R.L. Stine and the best friend pair Sonny and Sam’s adventures. Hoping to start his own family, Slappy kidnaps Sonny’s mother and brings all his ghastly friends back to life – just in time for Halloween. As the sleepy town is overrun with monsters, witches and other mysterious creatures, Sonny joins forces with his sister, Sam and a kindly neighbor to save Sonny’s mom and foil Slappy’s plan. Slappy is back and how!

Staying true to its proposition of Leap Forth, &flix, the official broadcaster for the television premiere of Goosebumps 2: Haunted Halloween will provide an exclusive opportunity to viewers to watch the movie, before anyone else. In order to promote this, the channel will activate and host contests on its digital platform that will start on October 20. #FlixFirstScreening #BeforeAnyoneElse

Tags:
Previous Article
Myntra launches campaign for Deepika Padukone’s ‘All about you’
Next Article
FYI TV18 takes you on a romantic journey, with ‘Love At First Flight’

FYI TV18 takes you on a romantic journey, with ‘Love At First Flight’
MediaInfoline Oct 20